Hi again dear journeystas. By the arrival of Umut, Culu's childhood friend we left Bangkok and started pedaling down south. And this episode is about our first days with him. We are glad that a friend just join us by bike after doing all these months alone with Culu. Now we are a bigger crew and having a lot of fun. So here's our road to Hua Hin. 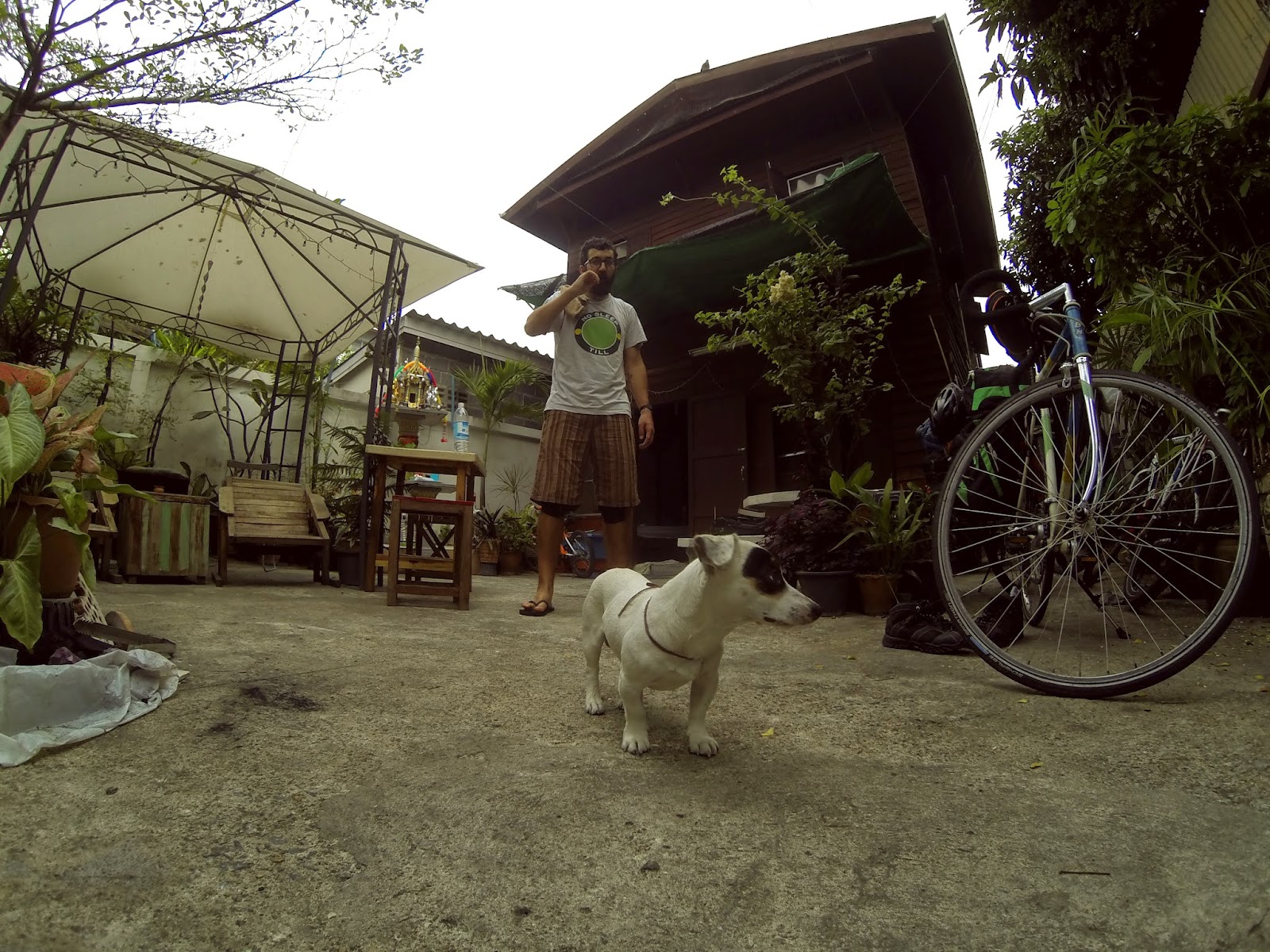 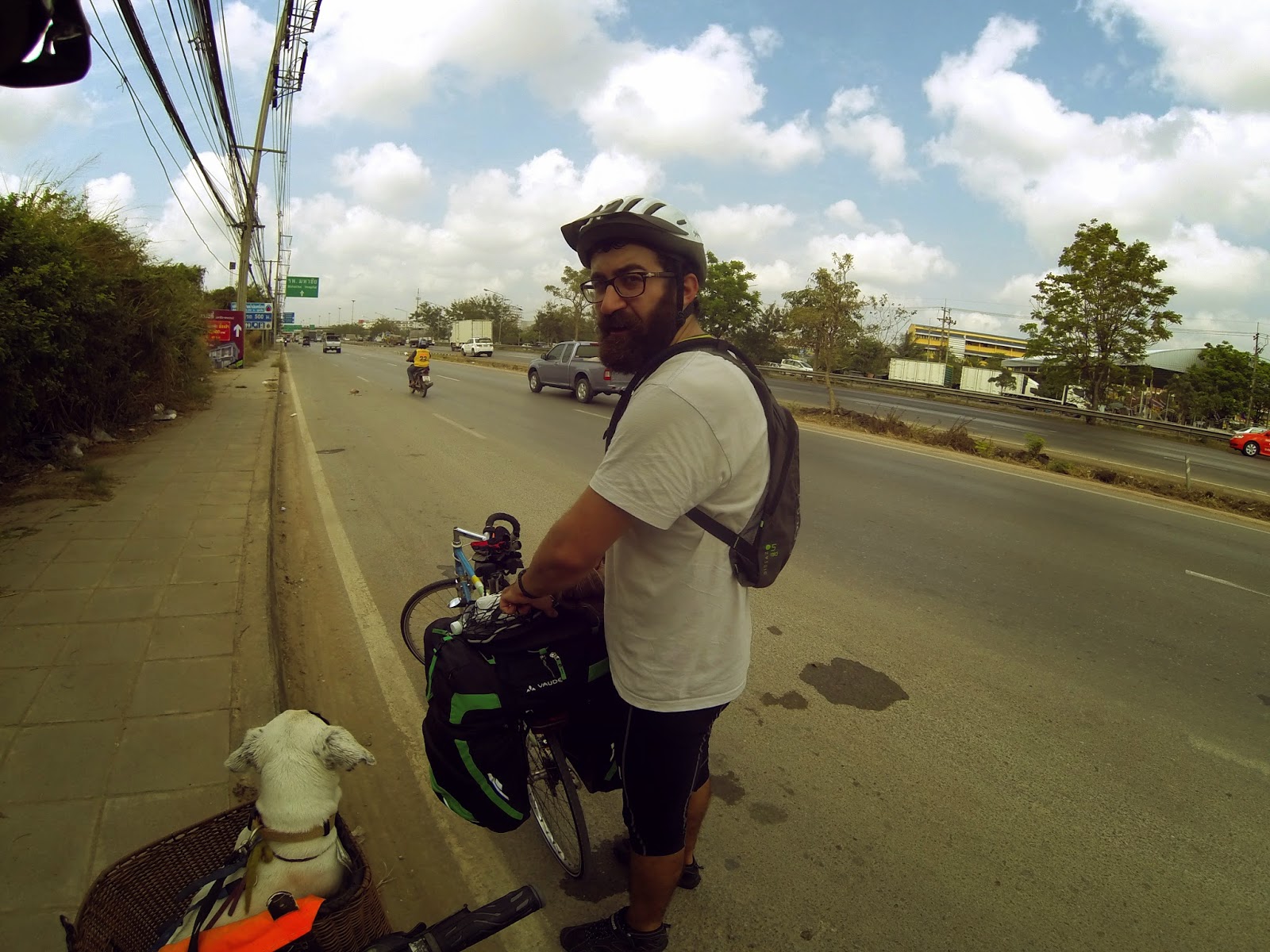 Umut is wearing these biking tights and giving us some funny images from the back. We've been told to get one of these pants before starting the trip but Culu doesn't feel too comfortable with his image to outside and never touch those things. 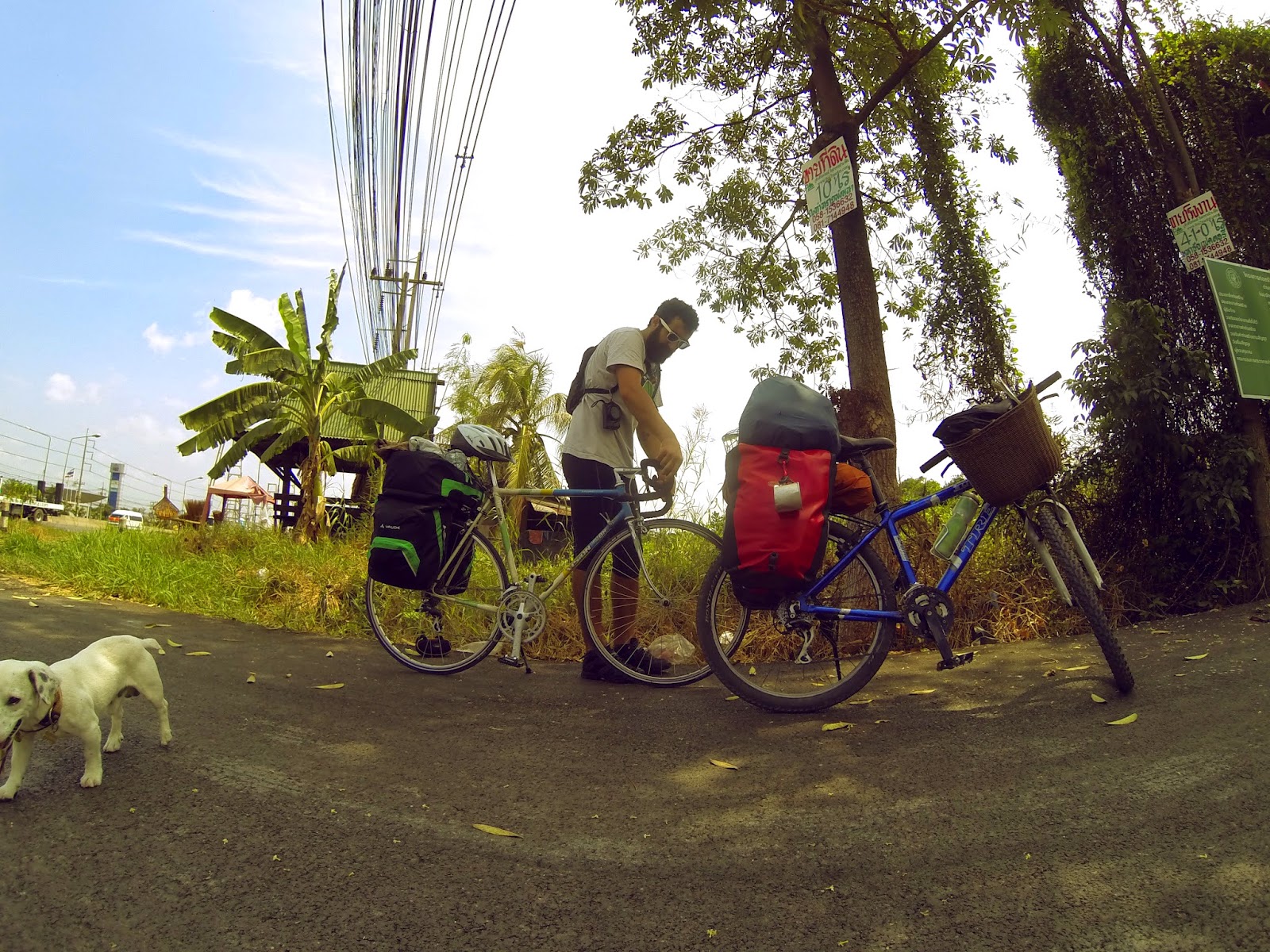 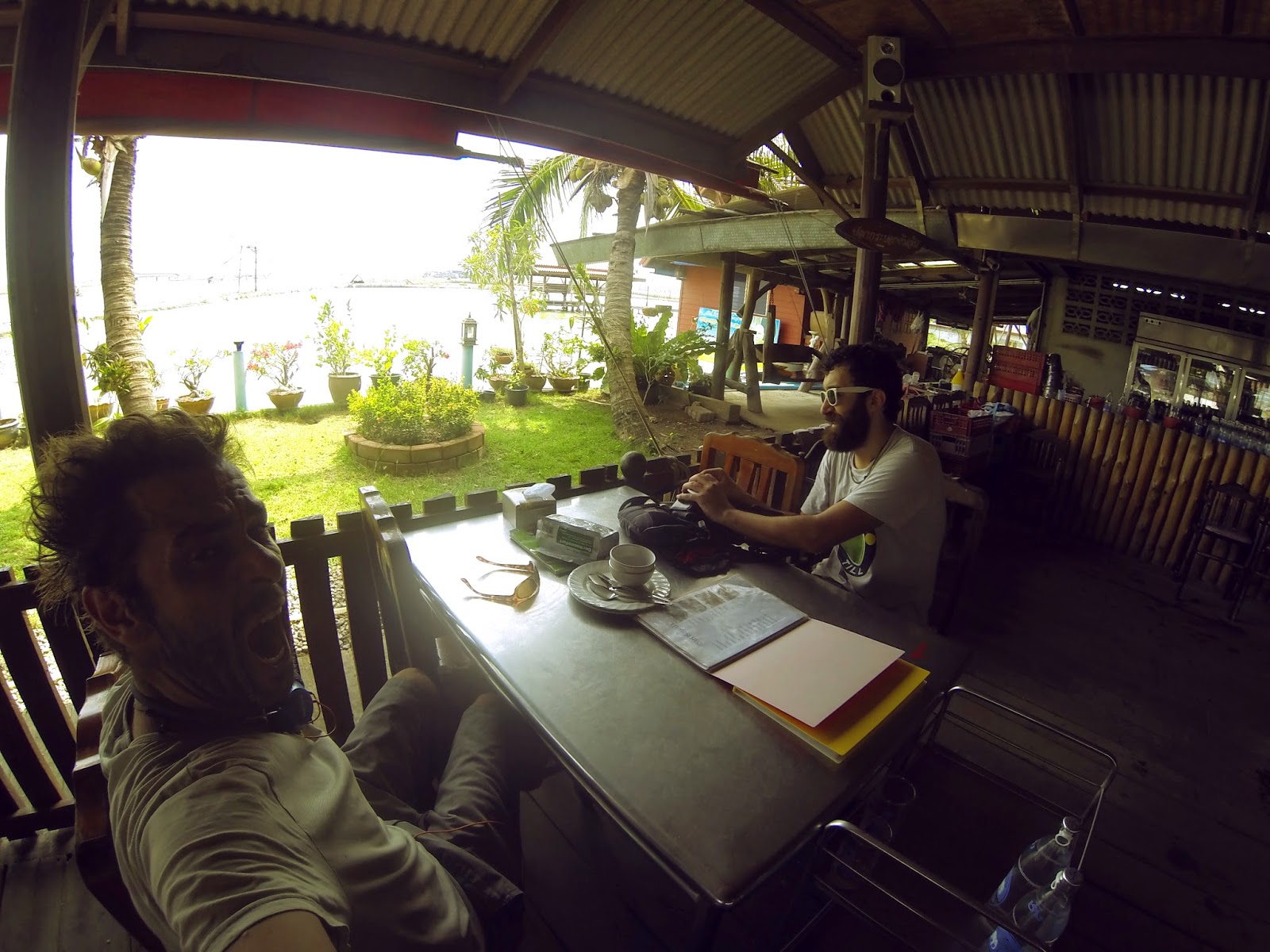 Culu's showing Umut some Thai dishes on the road. He insisted not to eat these spicy meals for the first week for not leaving his stomach at the loo. But he couldn't refuse those delicious pad thais. 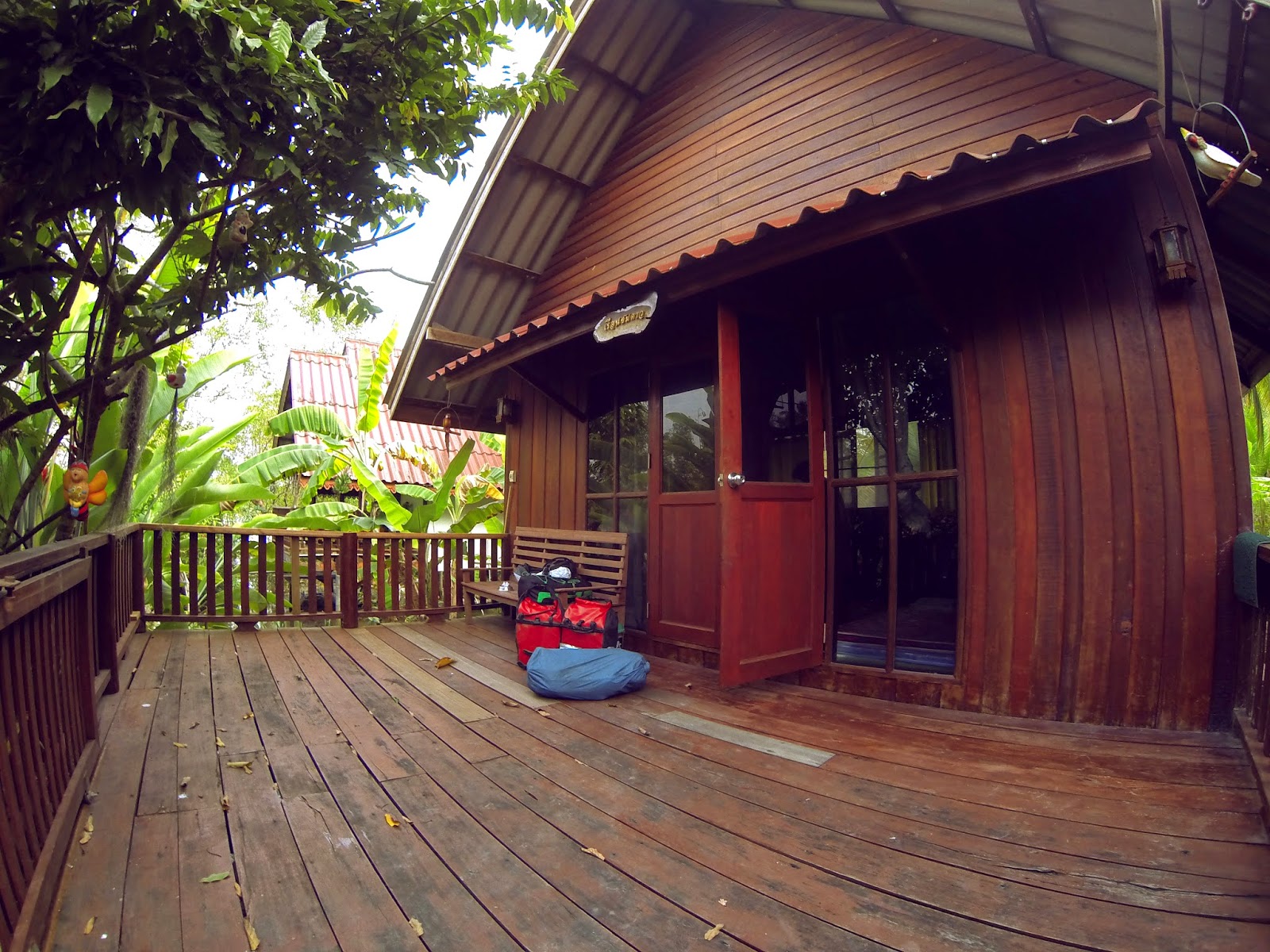 That was our first room with Umut. It was a beautiful place right next to the river. 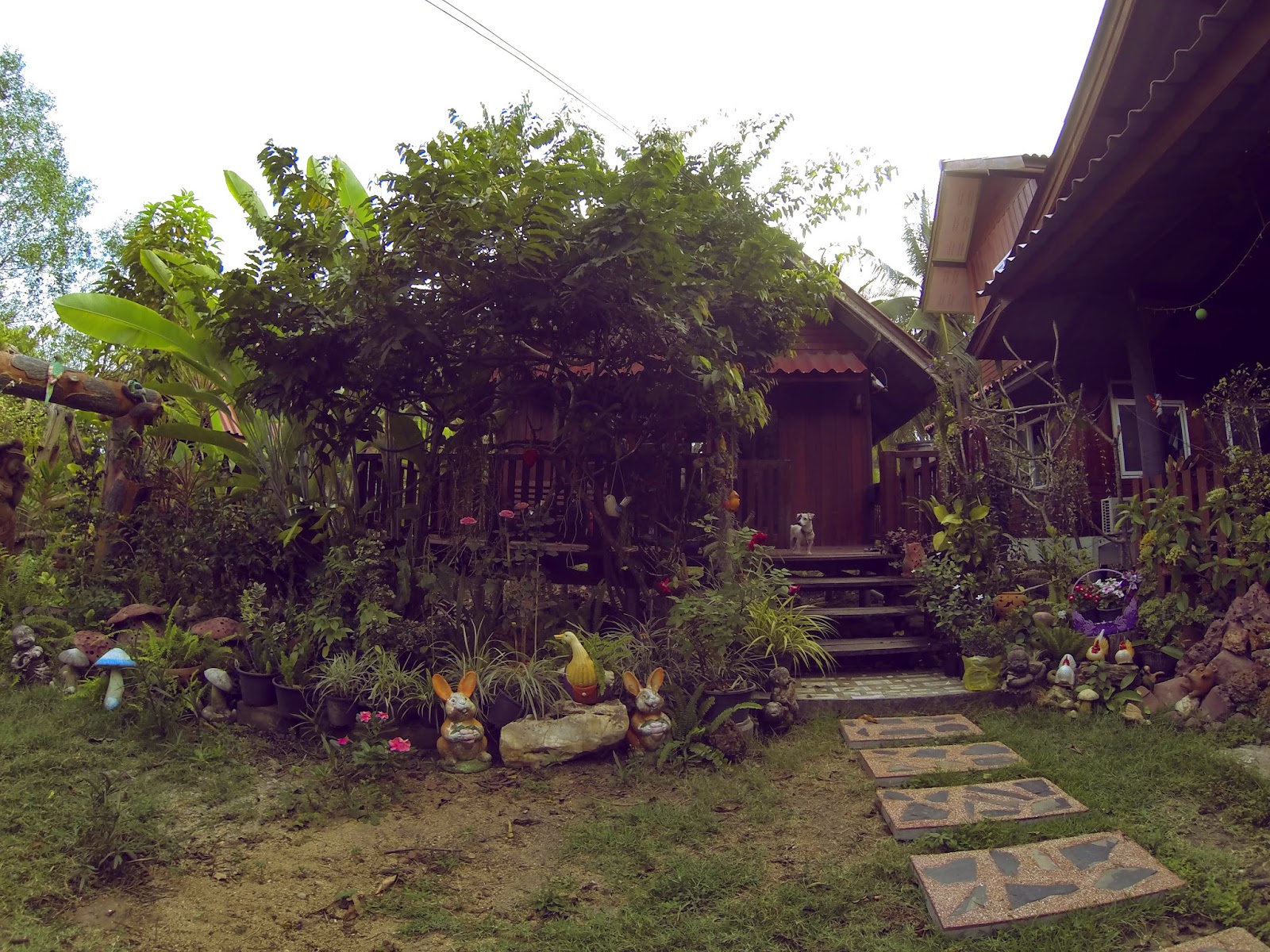 We pedaled that day for 90 km and it was Umut's first day on the road. We already had enough of cycling and thought to find a place to have a shower and rest. Then we find this homestay in a little town called Amphawa. Our hut was placed on a banana plantation site and it seems like the owners worked their ass off to create such a beautiful garden over there. 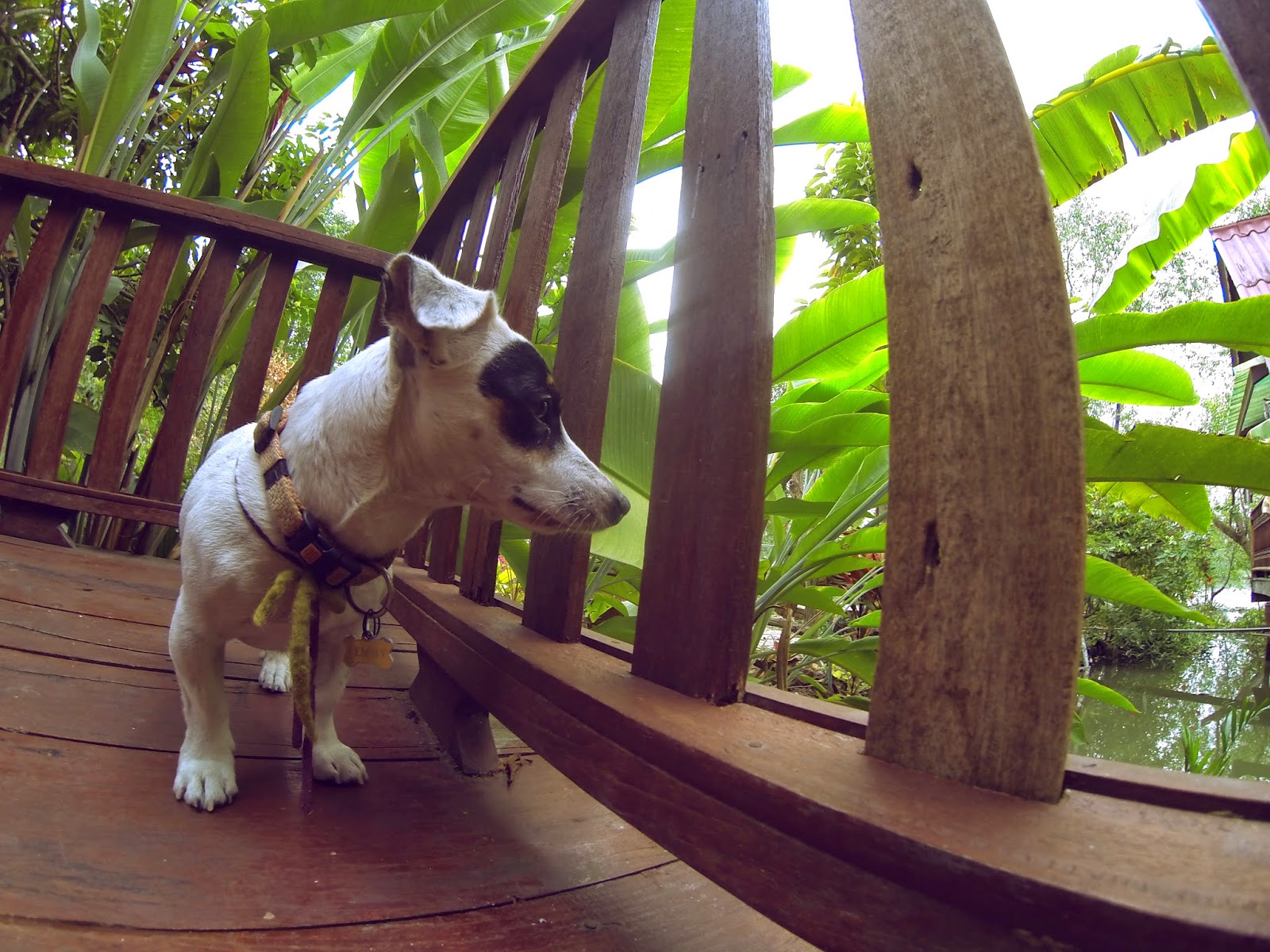 I was keen on jumping in those canals underneath our hut. 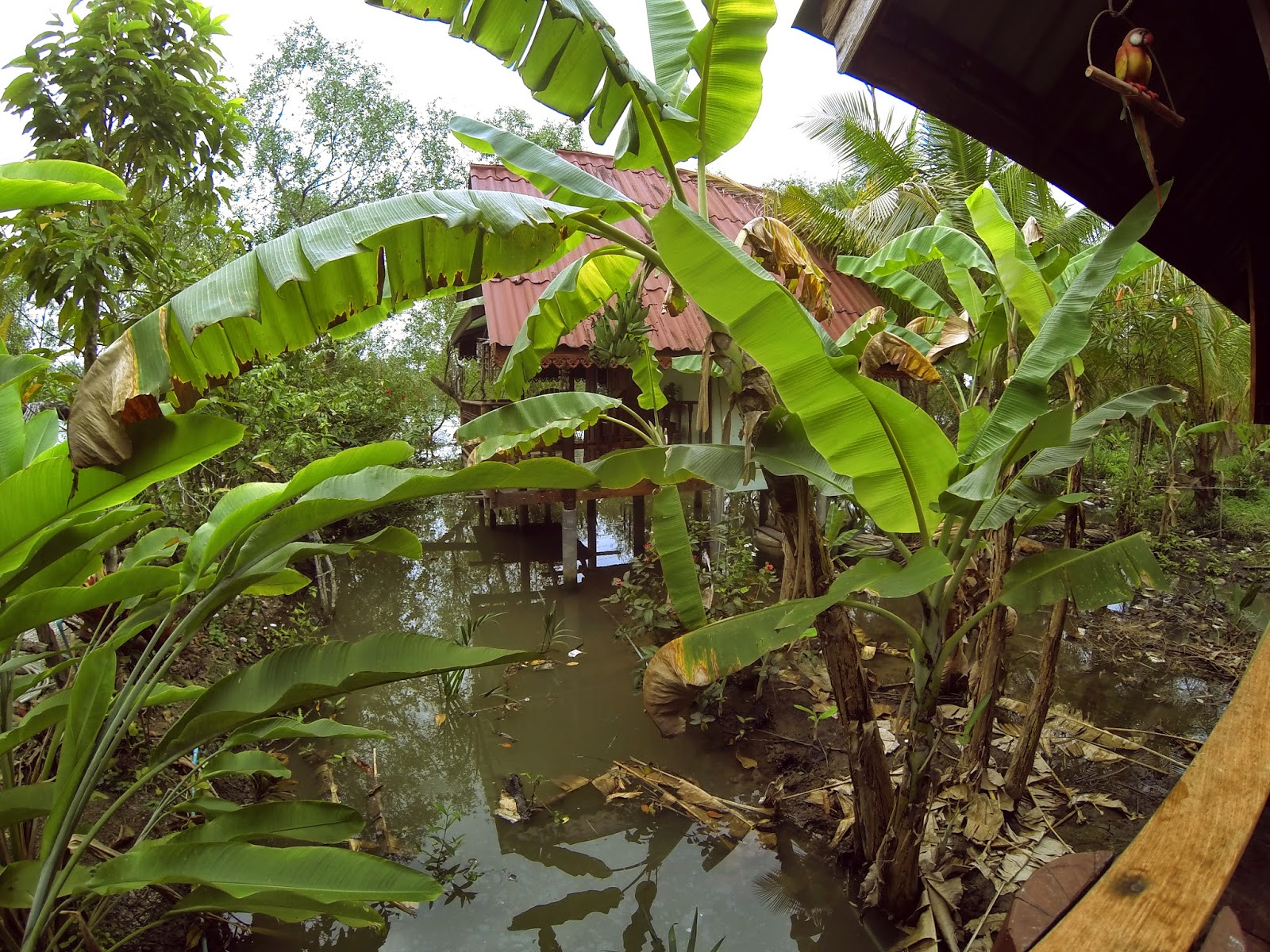 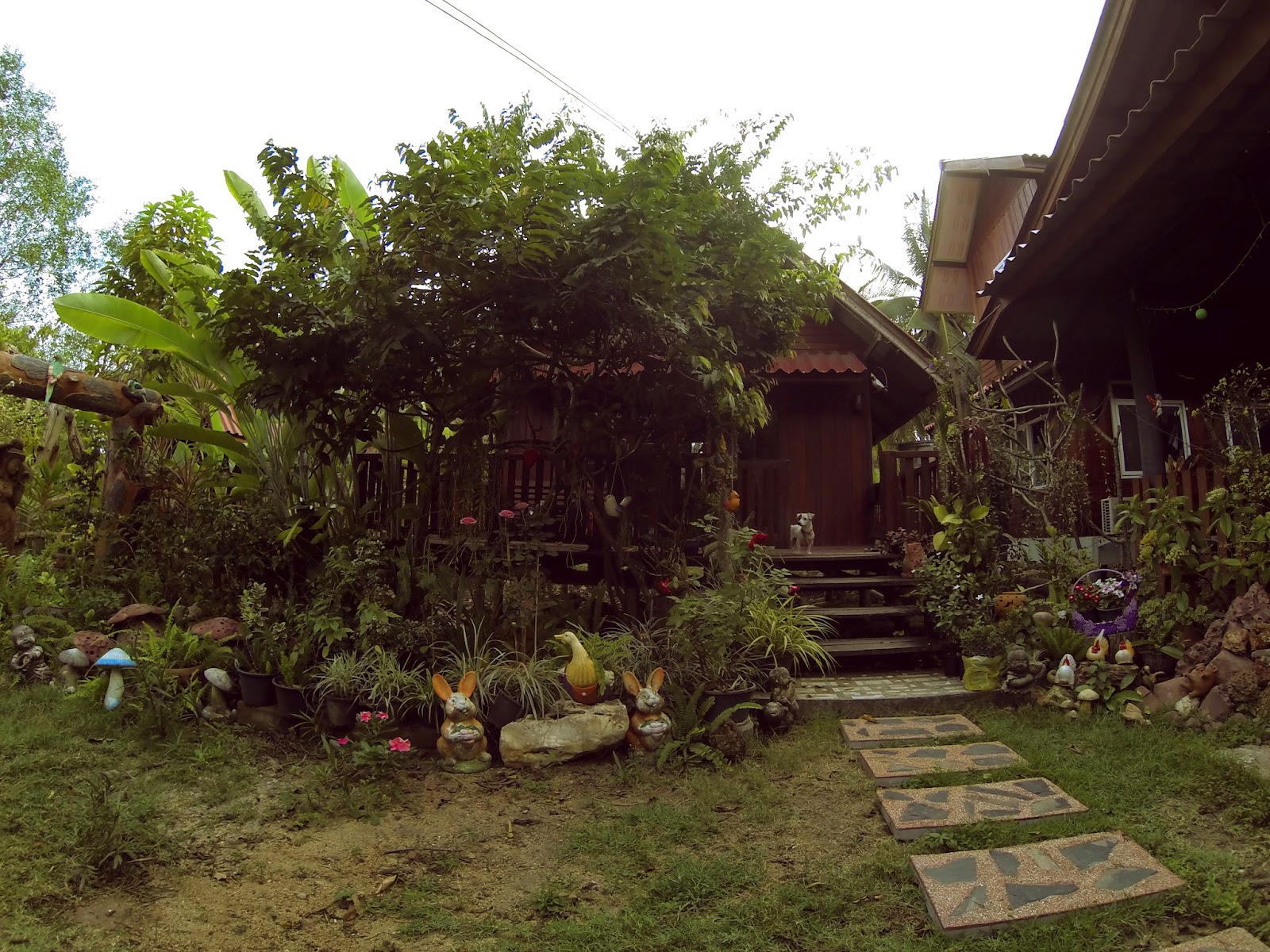 At first we were surprised to hear it wa just 400 bahts per night but then we realized that it was a misunderstanding. At the end we were a bit pissed off by hearing that the price was for one person. 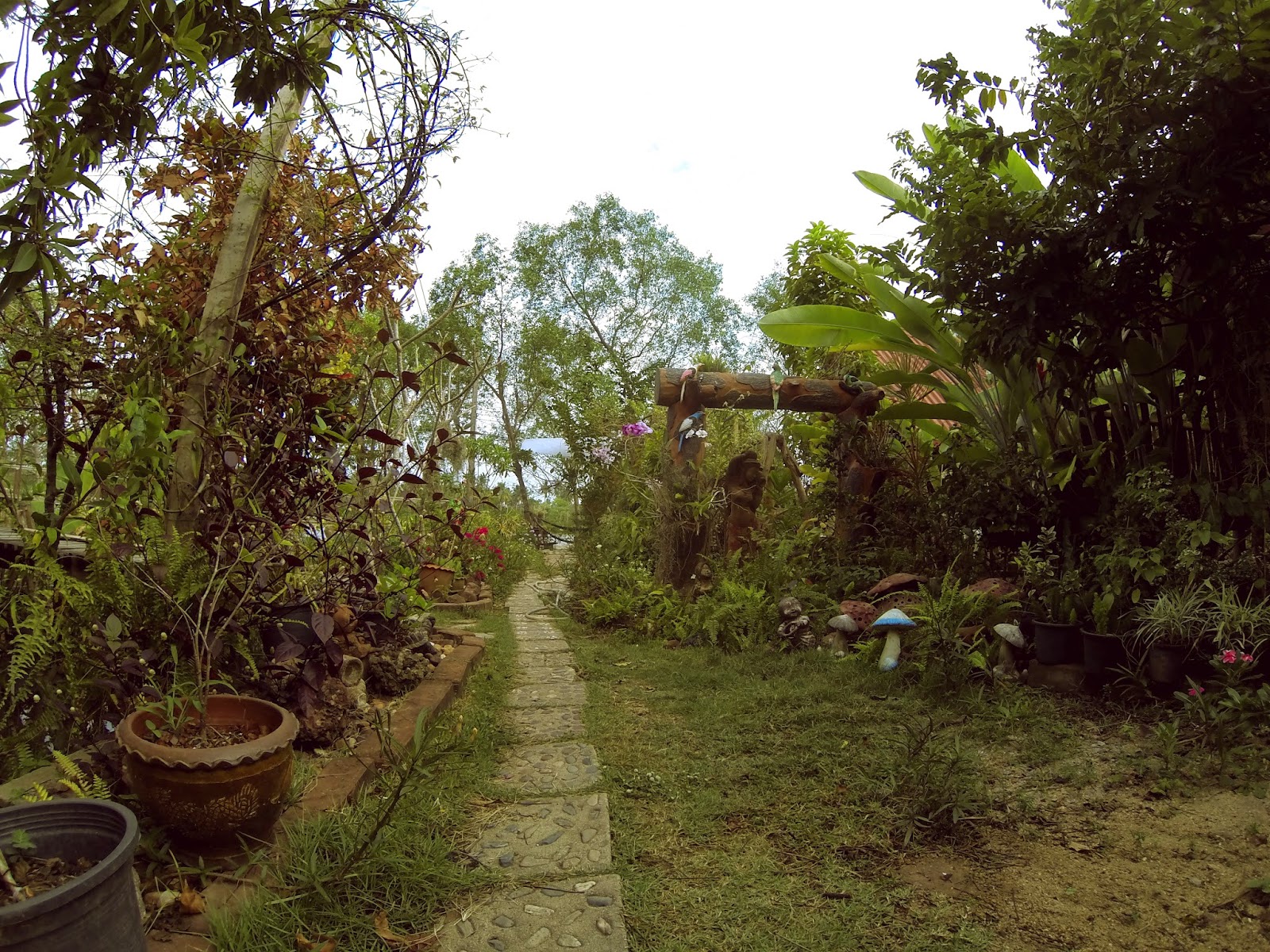 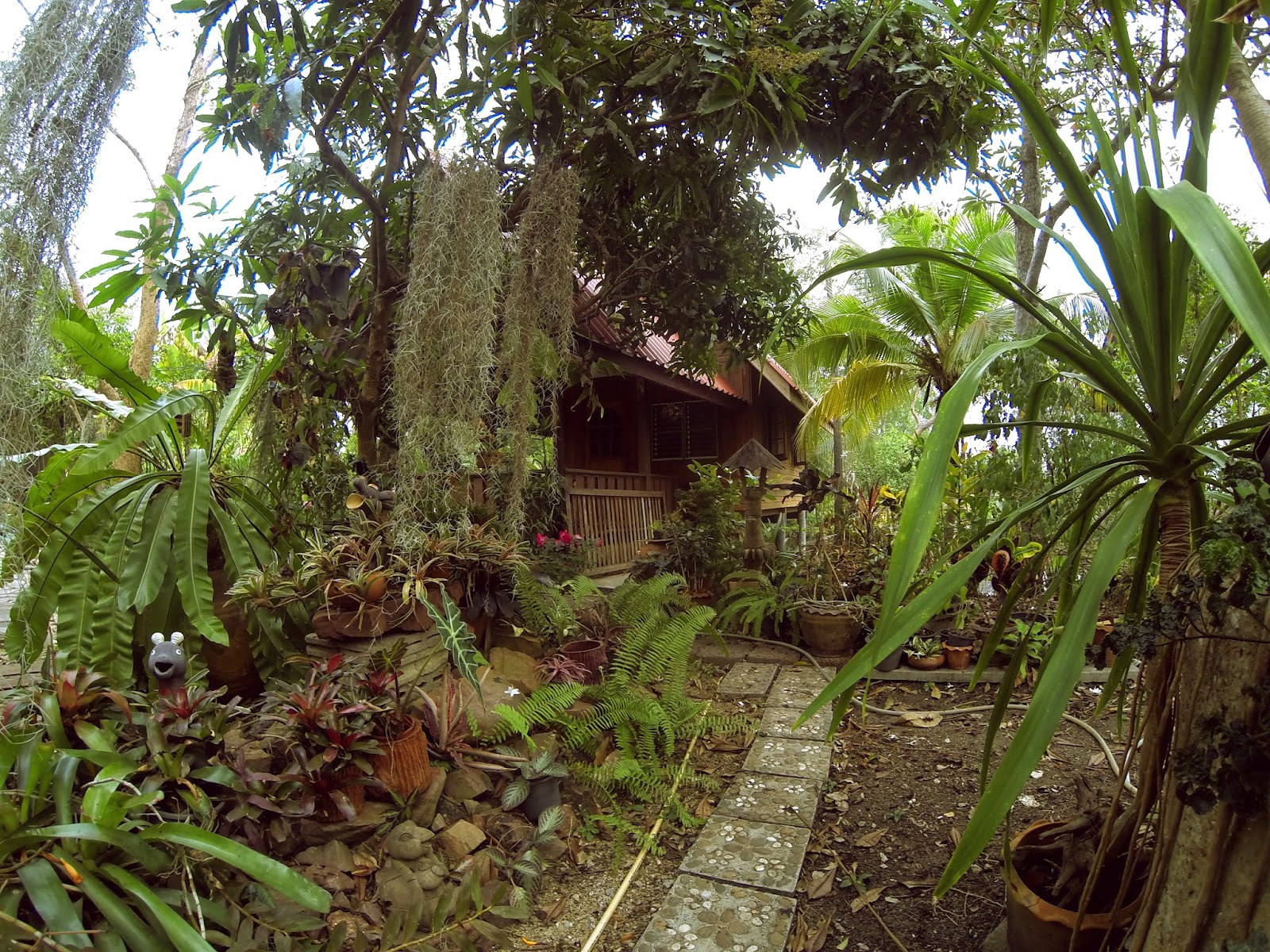 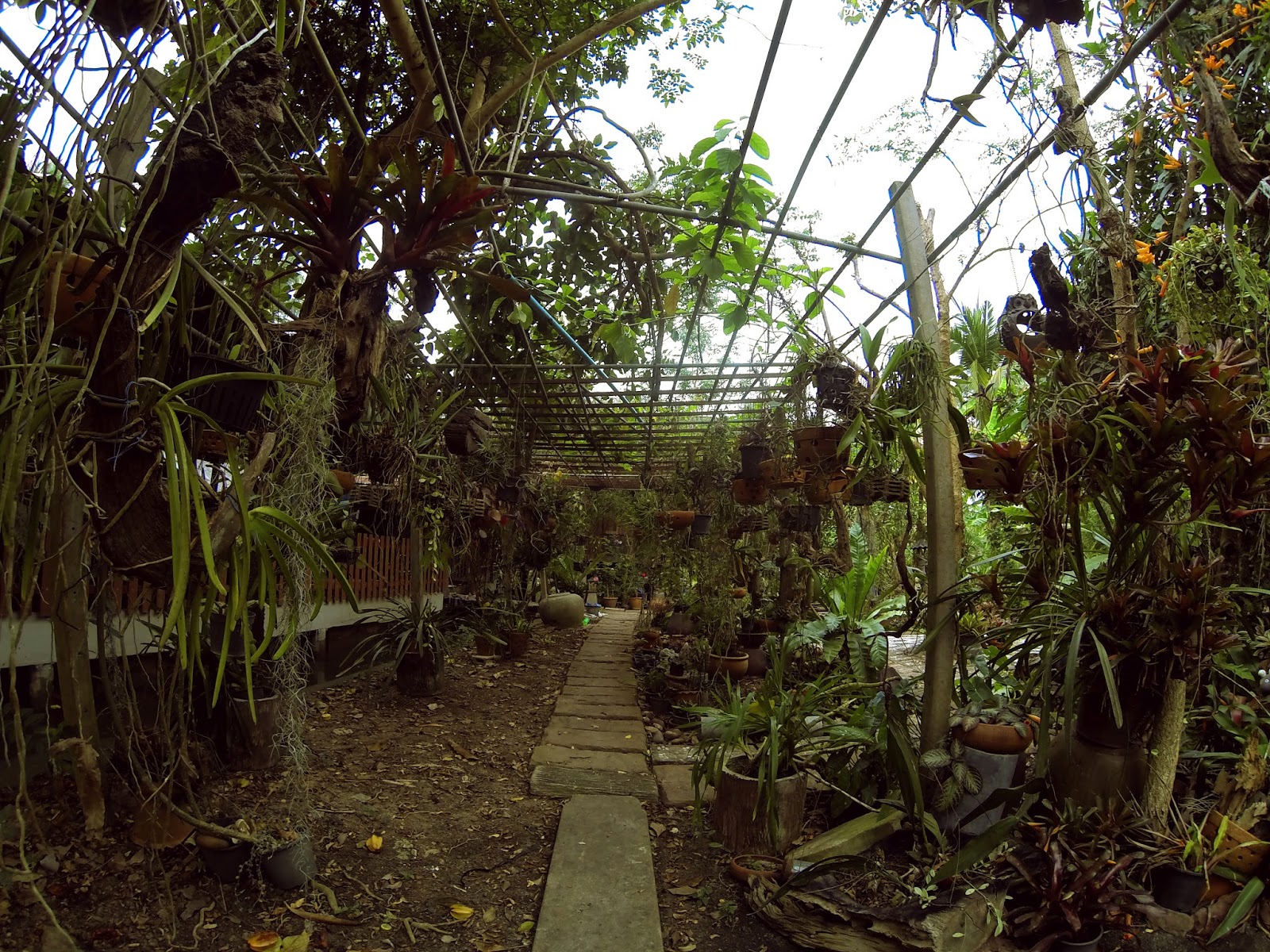 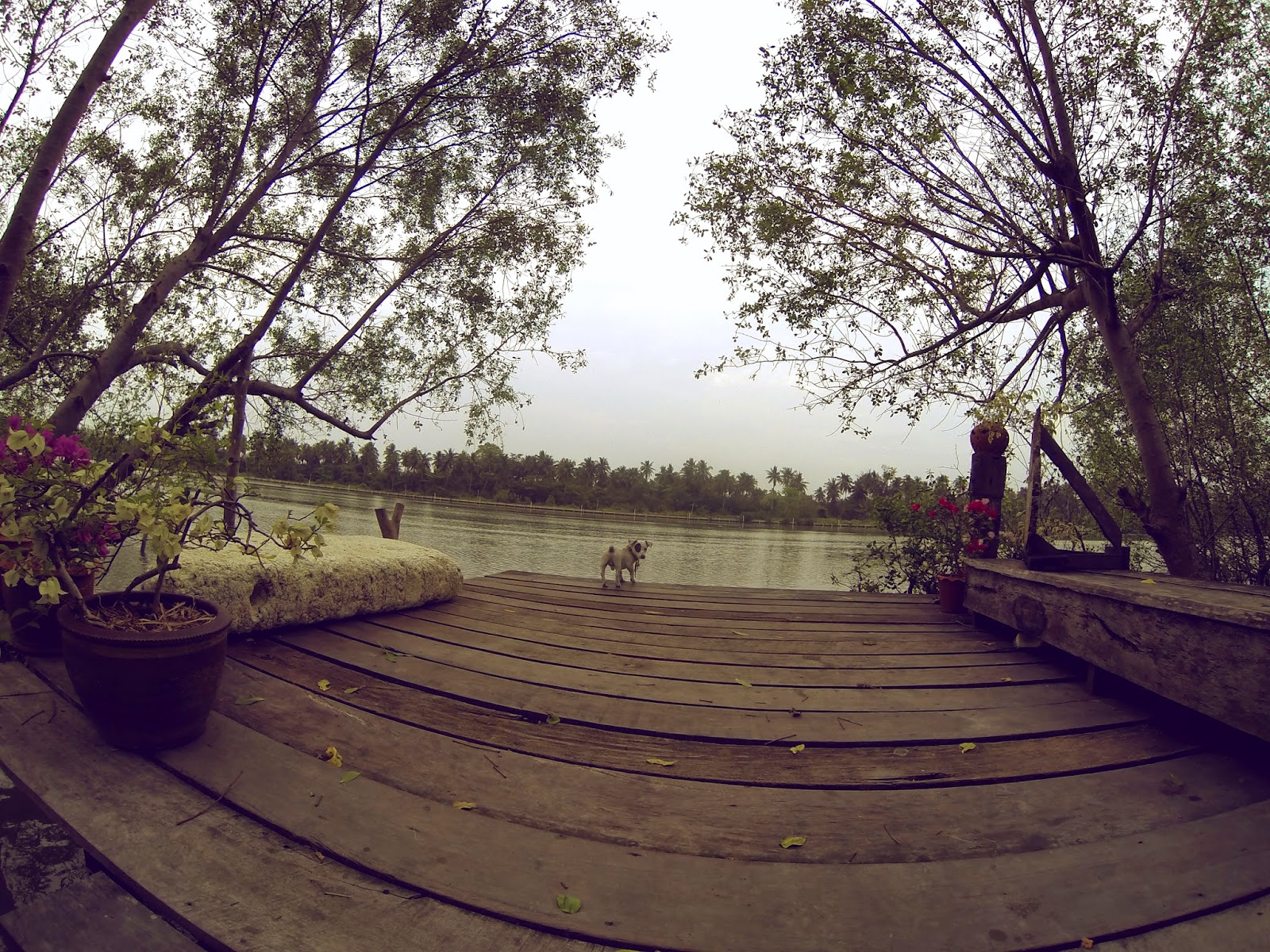 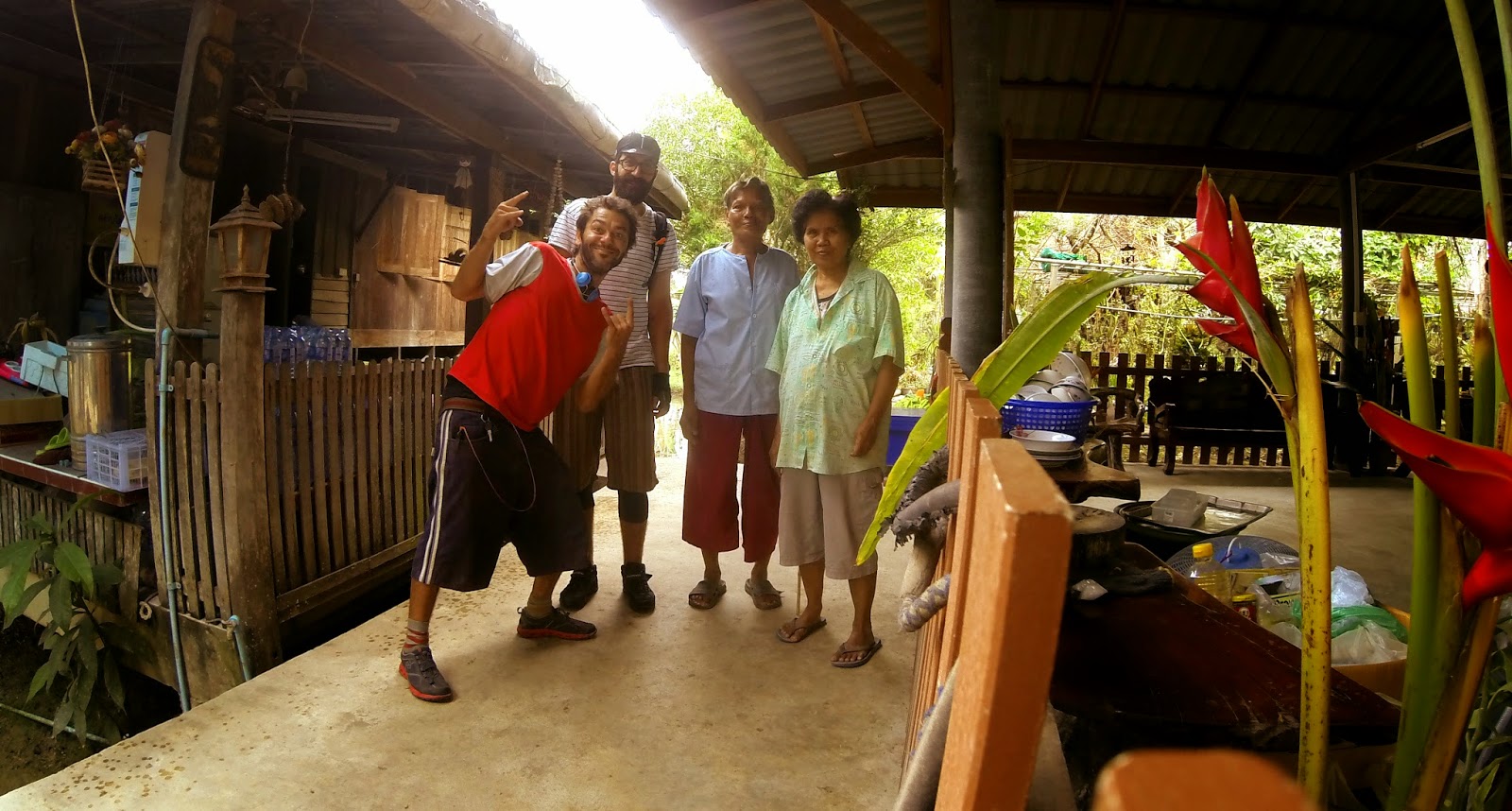 But anyway they were too kind to us and fed us at the breakfast with a huge bowl of Tom Yam Soup and bananas for the road. The old man even called Culu at night to show the wi-fis. At first Culu thought he was trying to show where the modem is. But actually he was trying to show Culu the fireflies covering the trees which makes them looks like a Christmas tree. 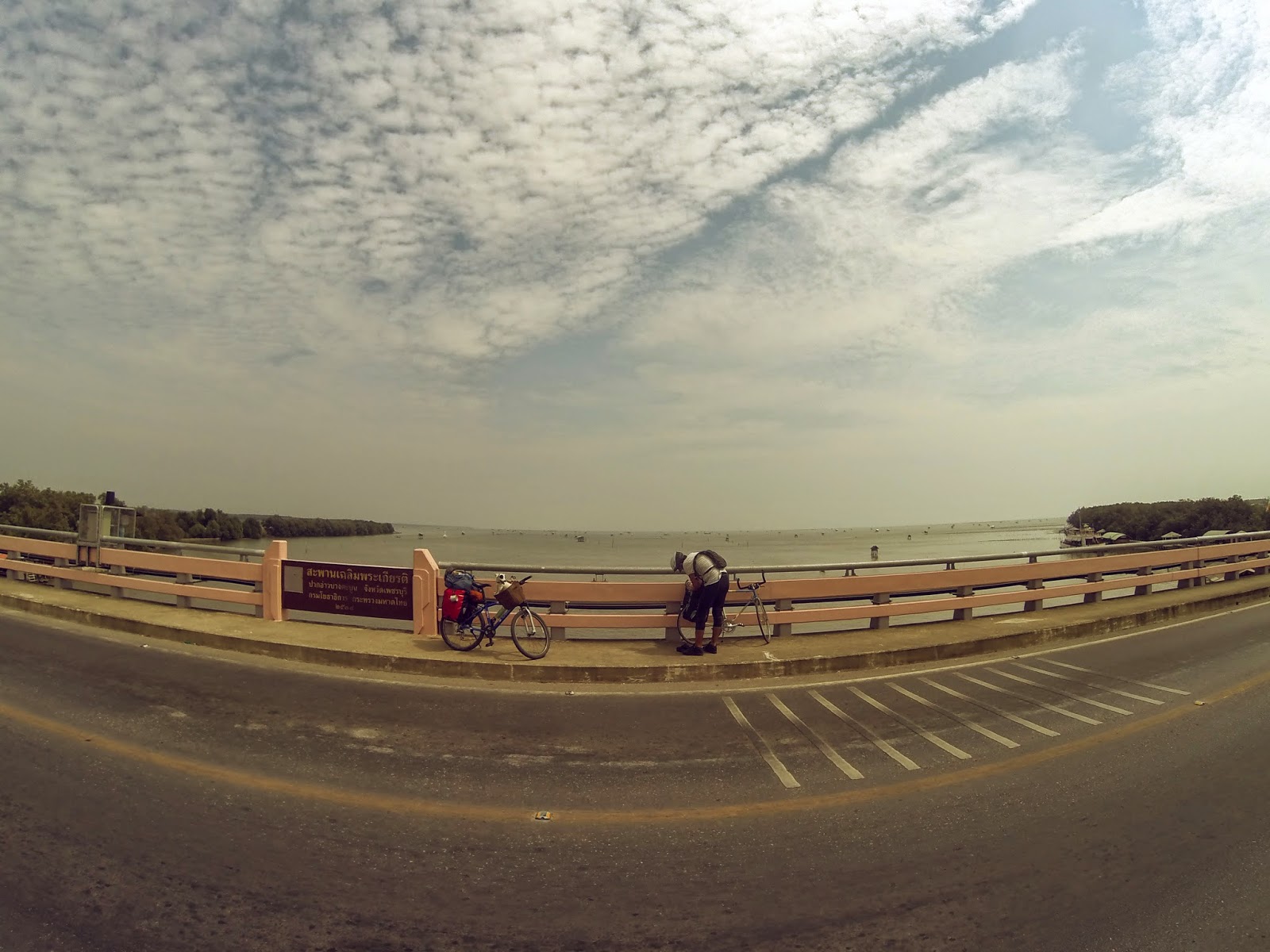 And finally we reached the sea after 110 km of road trip. These black spots on the sea are fishermen huts installed on the water. 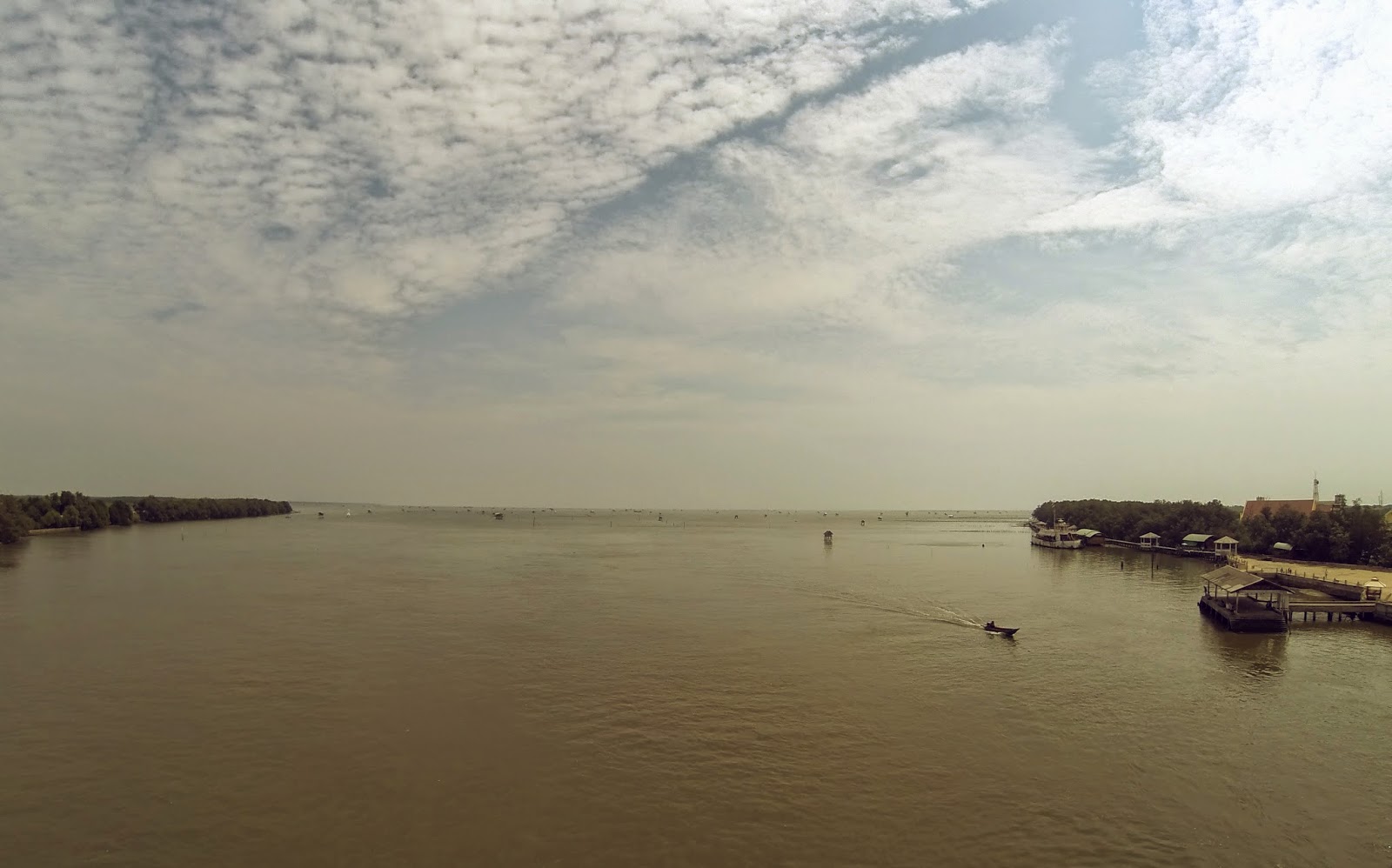 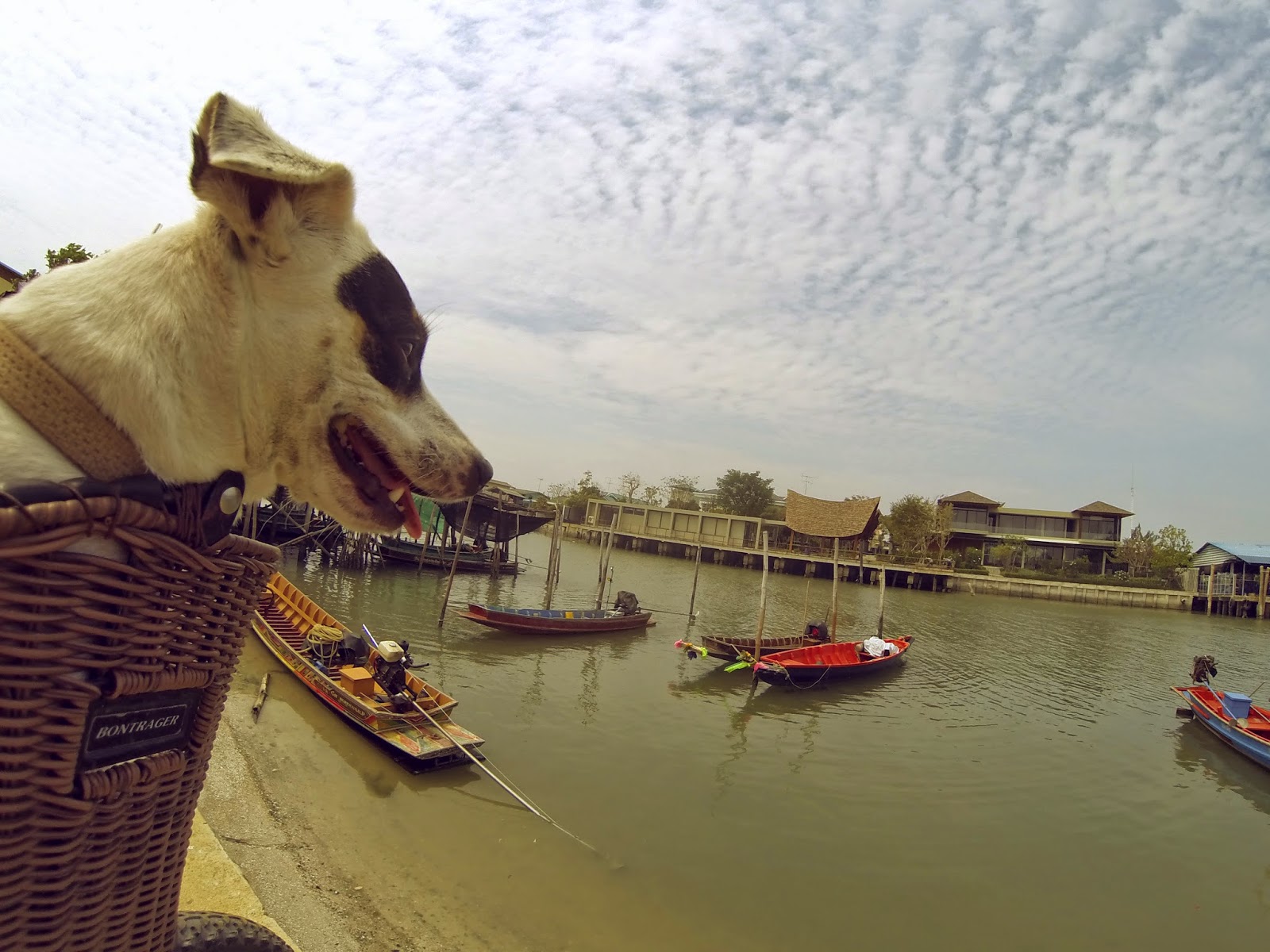 That day we started early to search for a place to camp for the night. We tried to settle up close to the water but ended up in a buddhist temple. 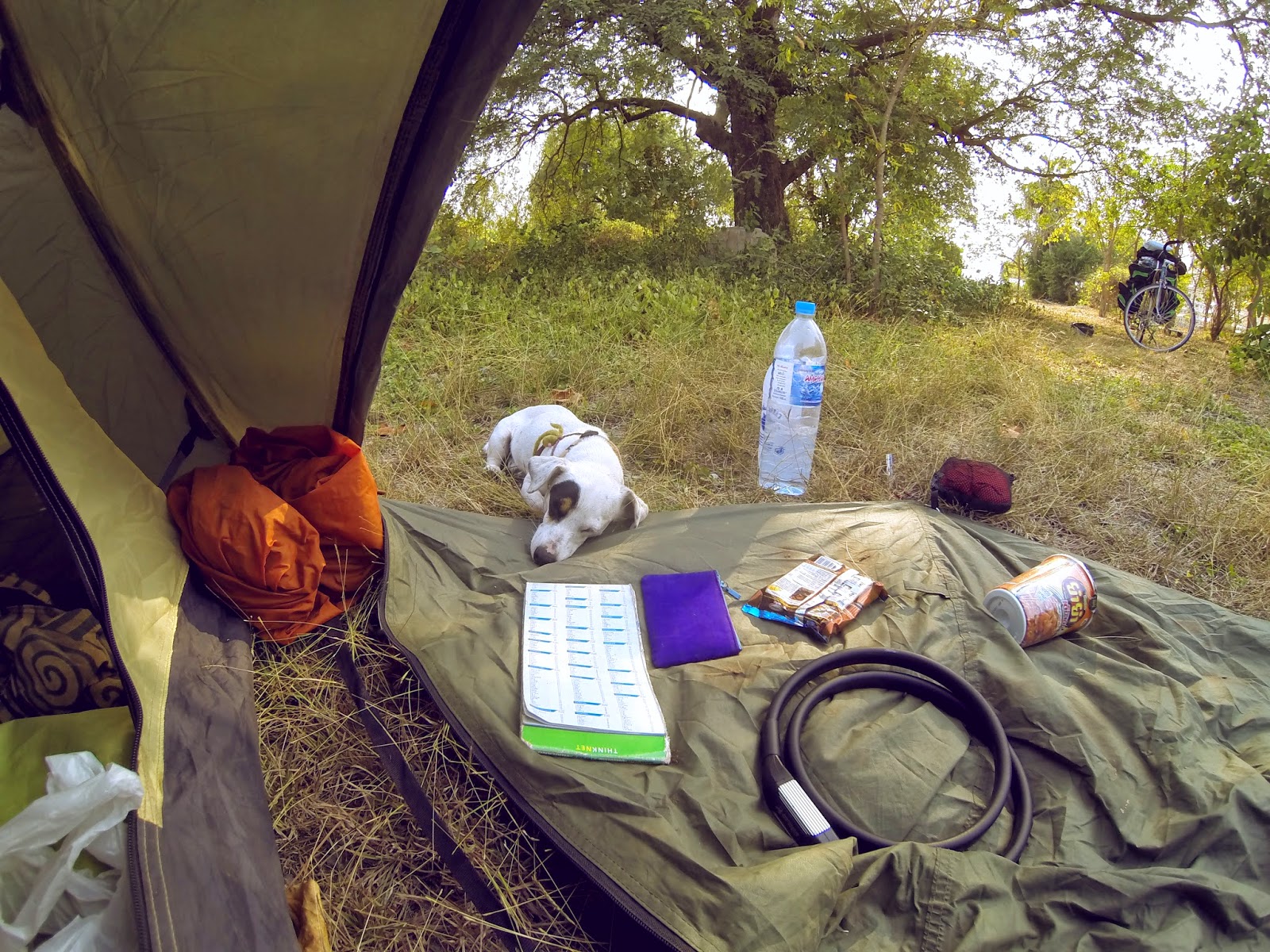 I took the chance to have a nap right away while the guys were setting the tents up. 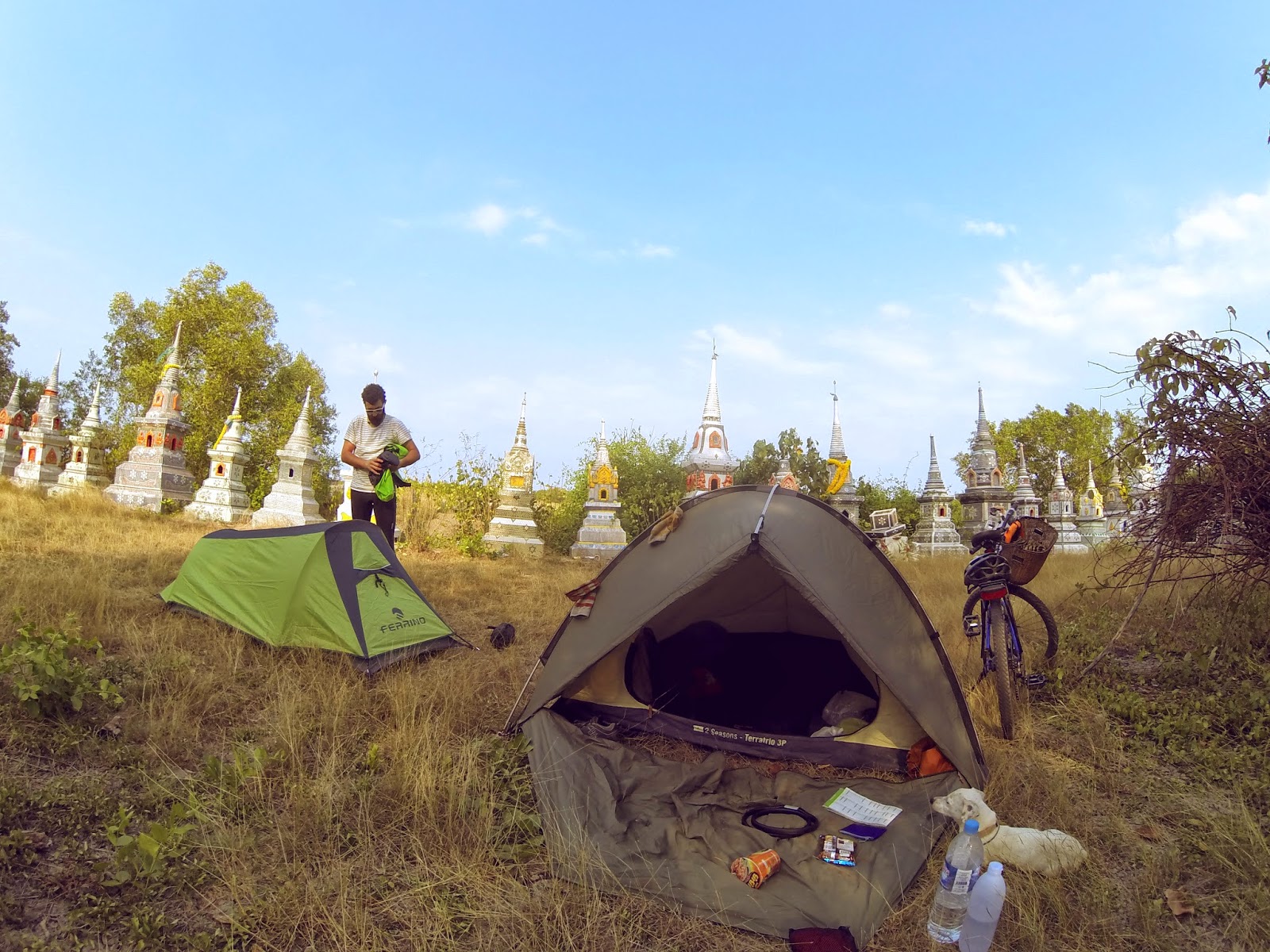 At first Umut didn't want to stay in the garden of the temple. He was asking Culu if we have rights to stay here or we should ask to somebody before settling up. But since there were nobody to ask Culu told him about our previous experiences. Usually it is the best place to camp and stay overnight. We always choose a school or a temple if we need to stop. First of all the monks are always welcoming. If you need a place or even food you shouldn't hesitate to ask them. It was a bit weird though to sleep at the cemetery of the temple but somehow we felt comfortable and sheltered with all these blessed souls behind us. There was a bird sanctuary right behind the tombs. We had blue birds flying above us and some others chirping at the pond back. 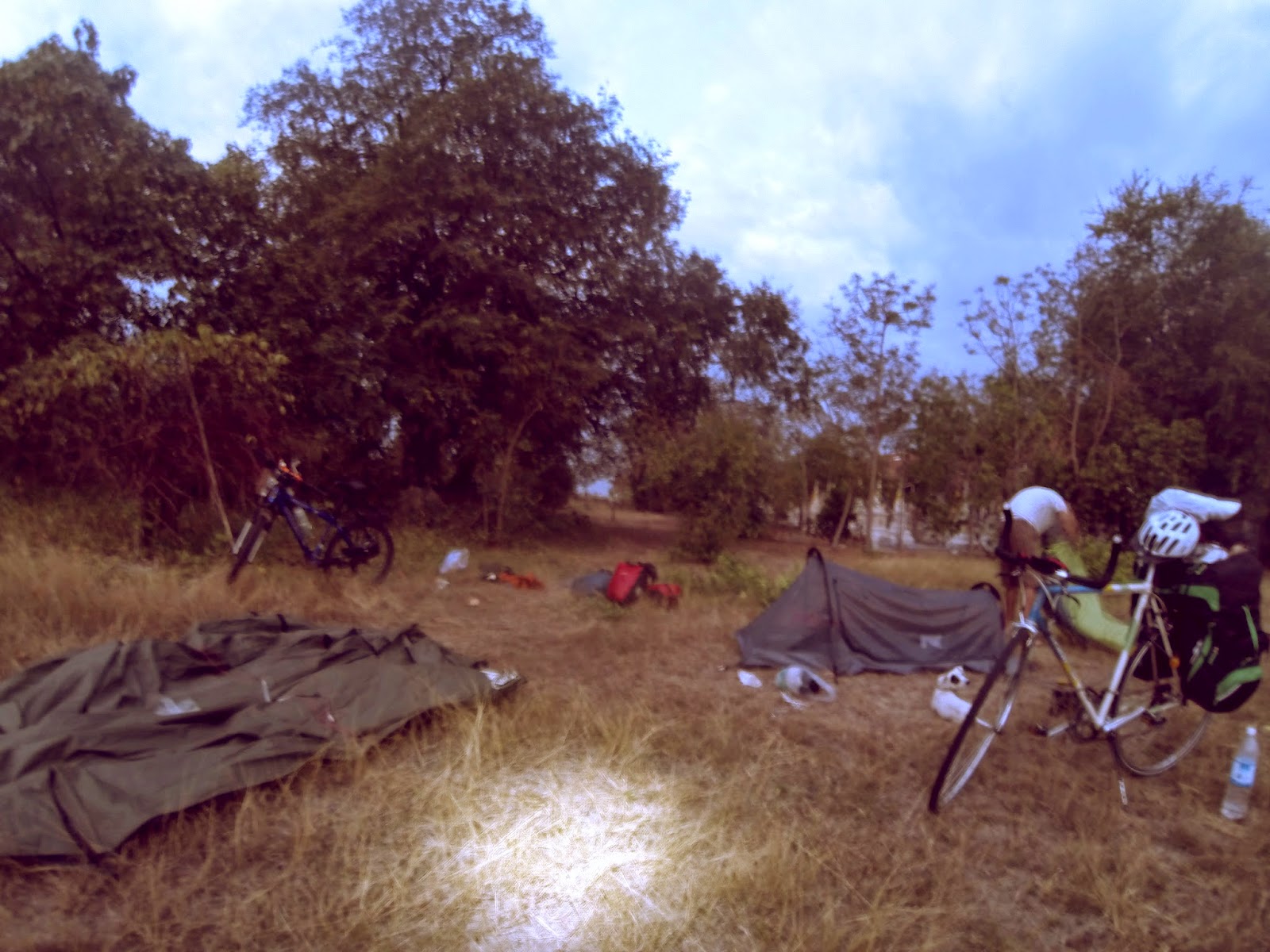 It's better to wake up very early like five thirty to pack the stuff and go back to the road. 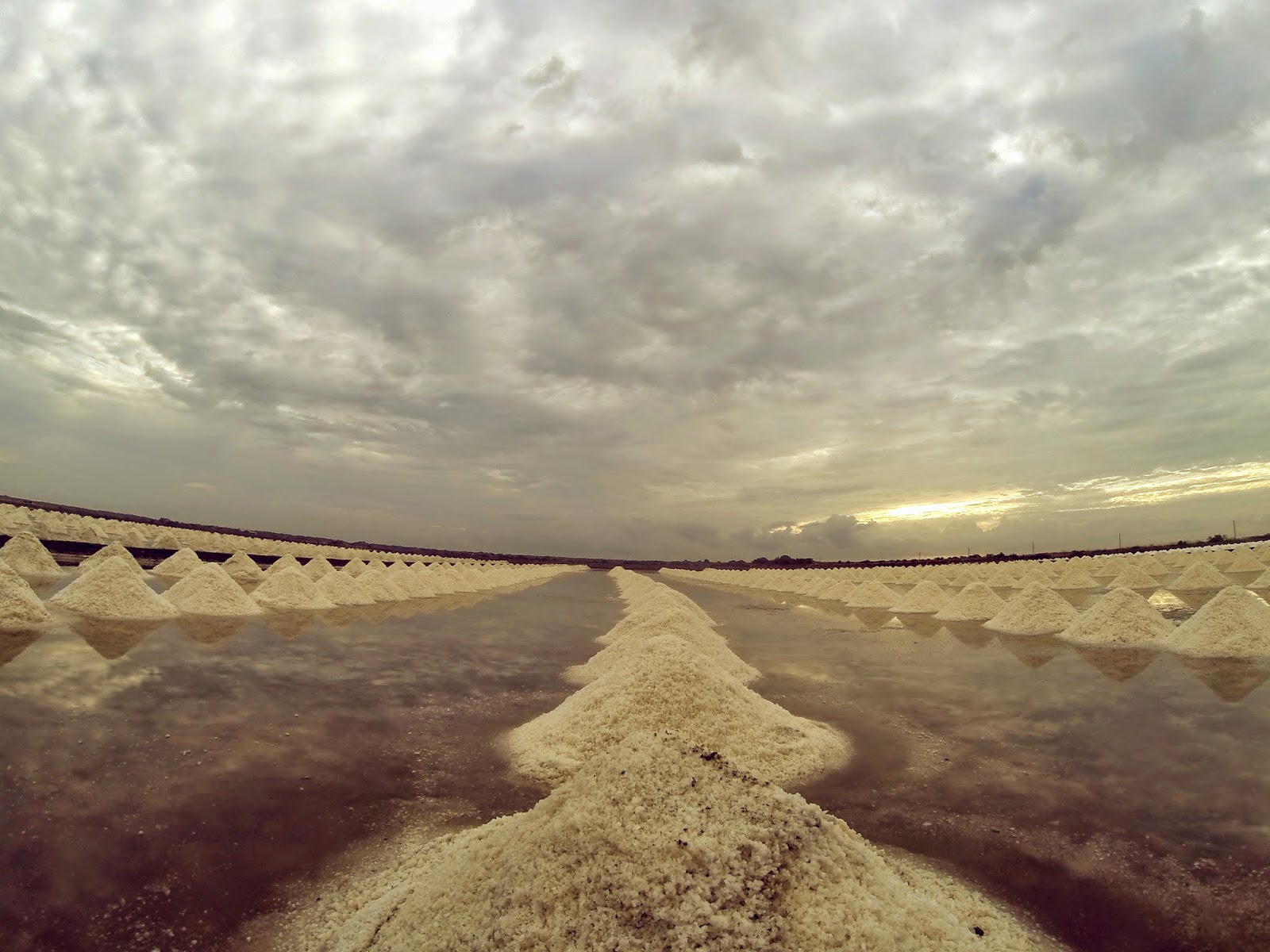 We only have to ride about 30 km that day. On the road we passed the salt farms of the south western coast. 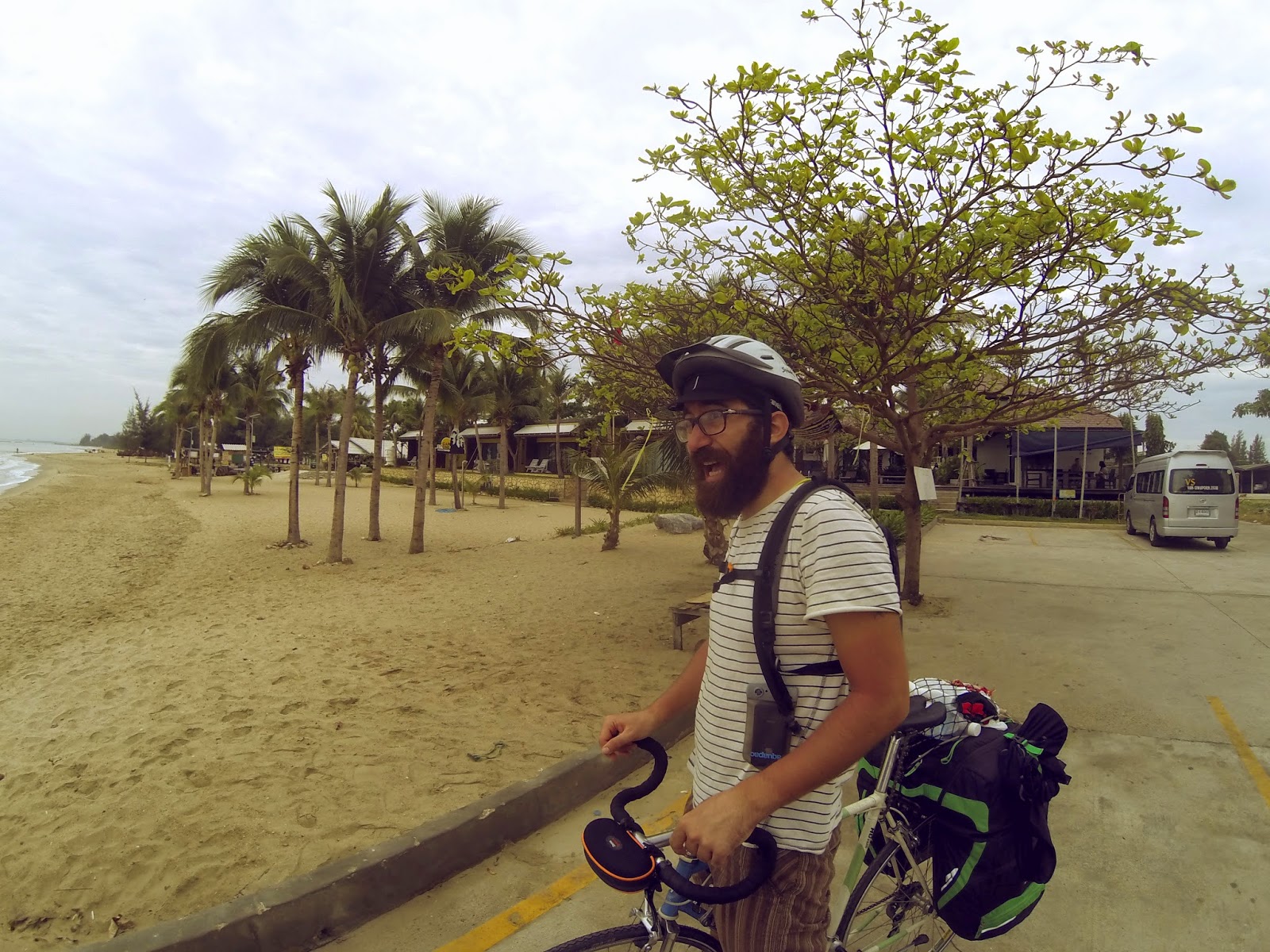 And finally we reached the beach. You can clearly see the excitement of Umut in his eyes. 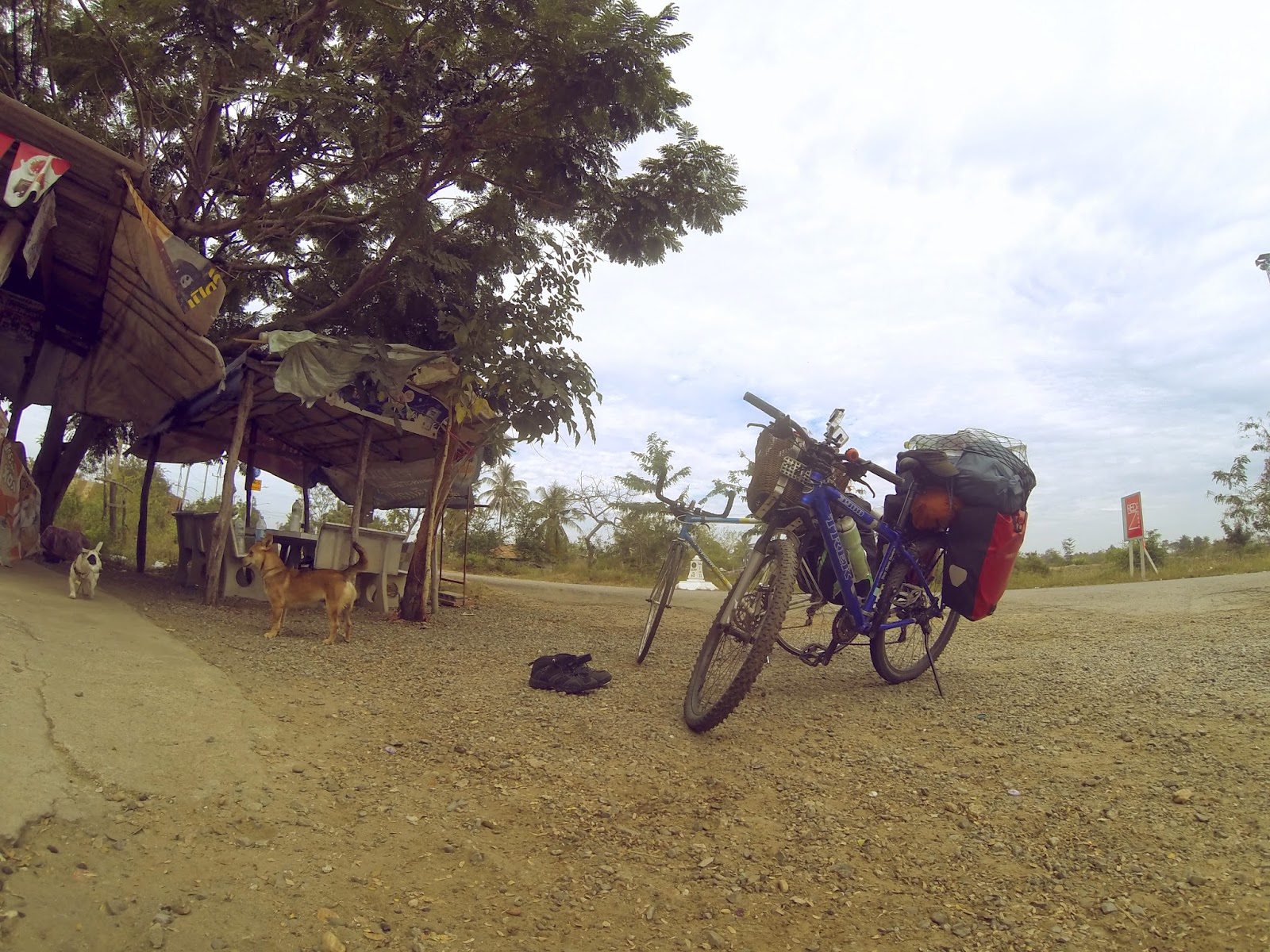 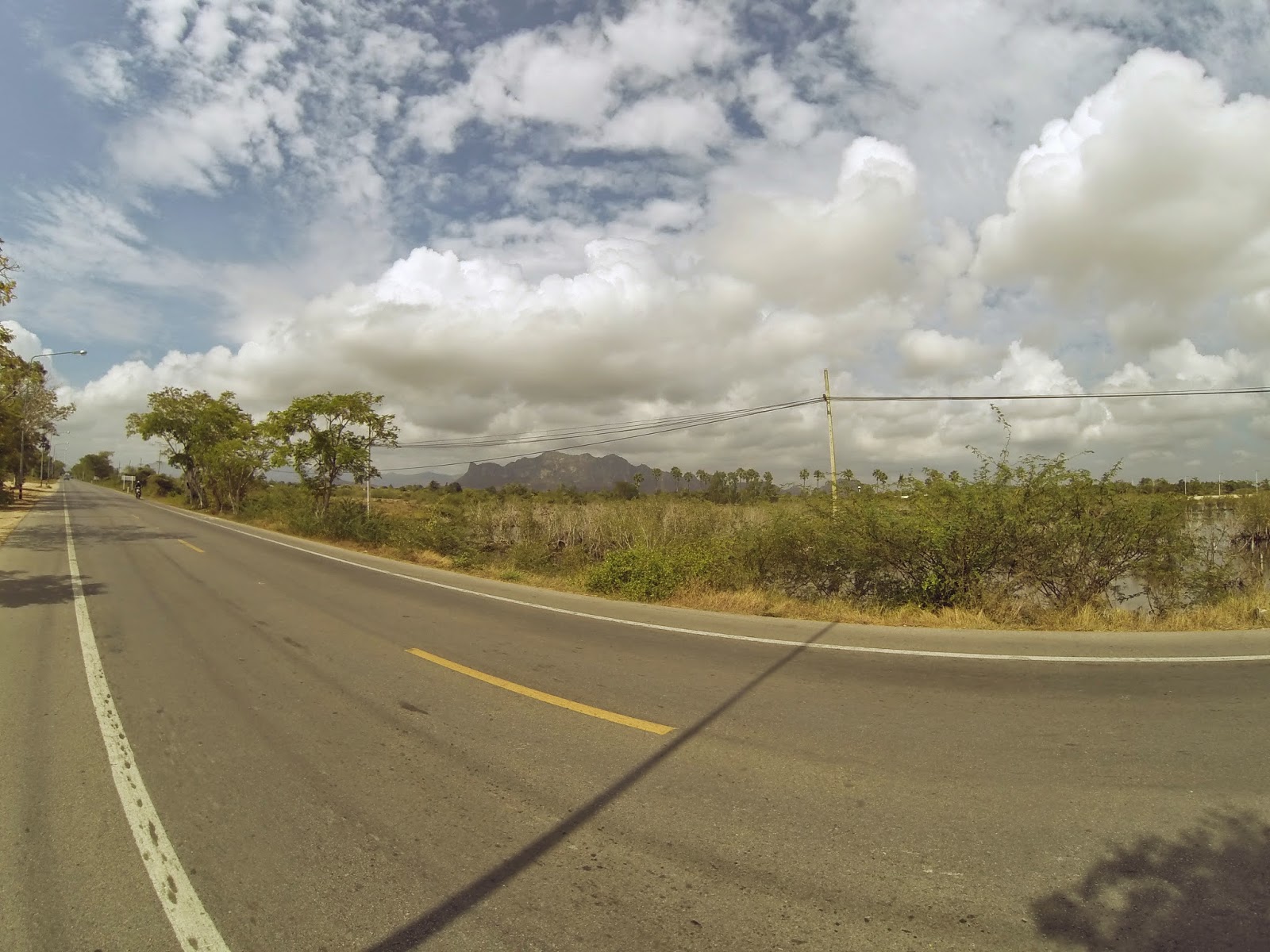 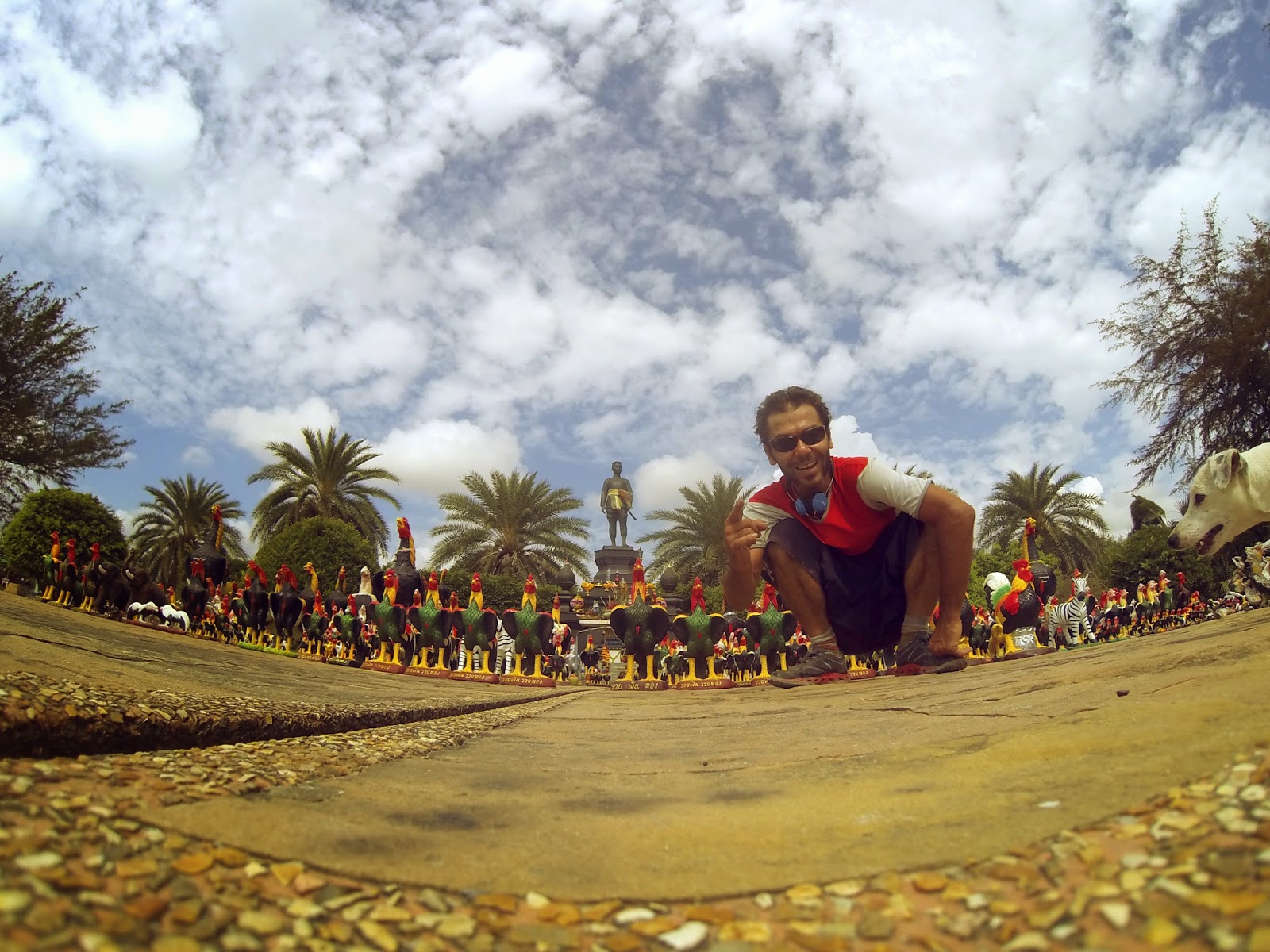 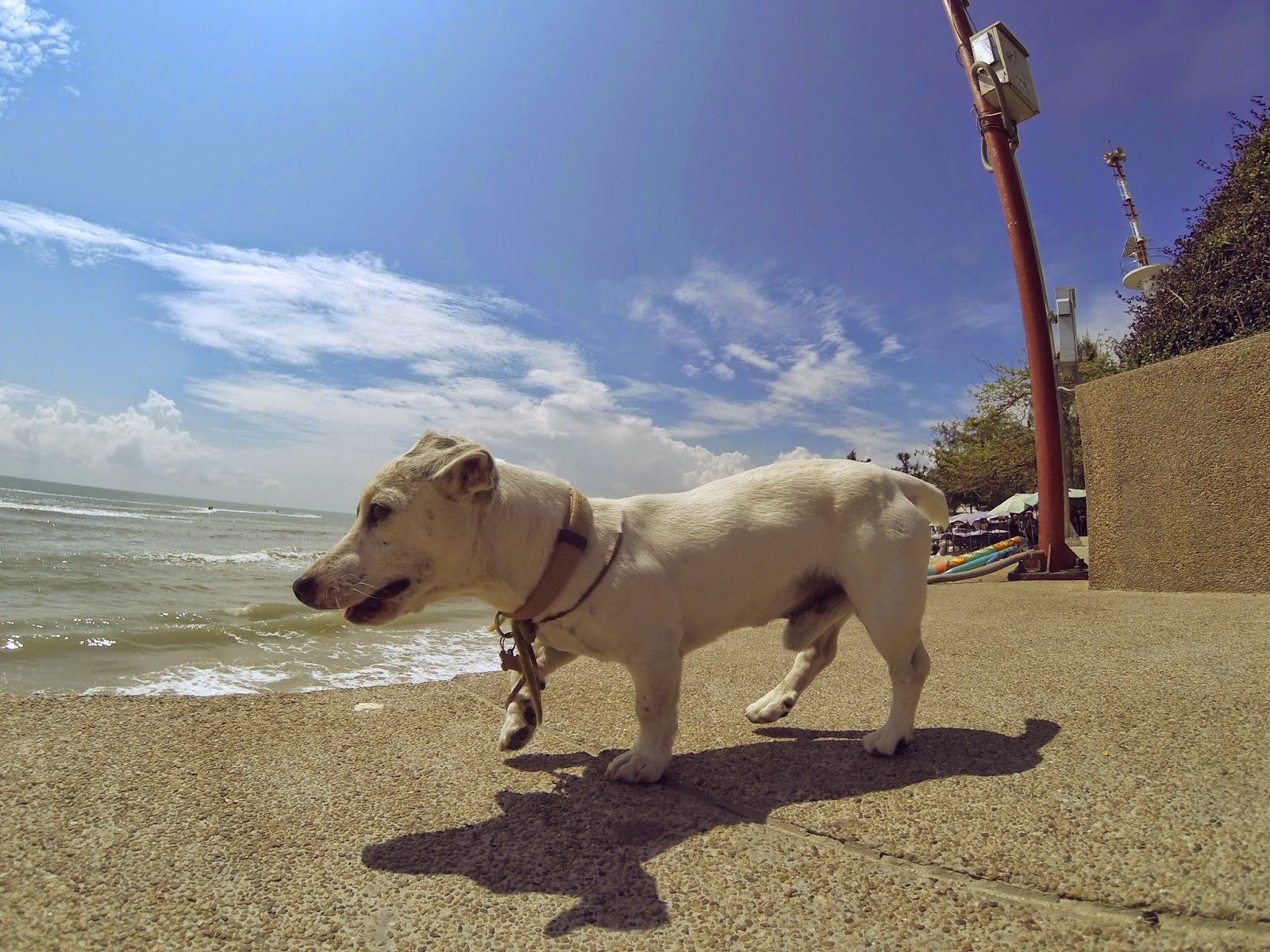 And here we are at Cha Am Beach where we get in the water all together to cool down a bit. It is getting warmer everyday guys. We are becoming lobsters soon. Umut is already suffering from sunburn. 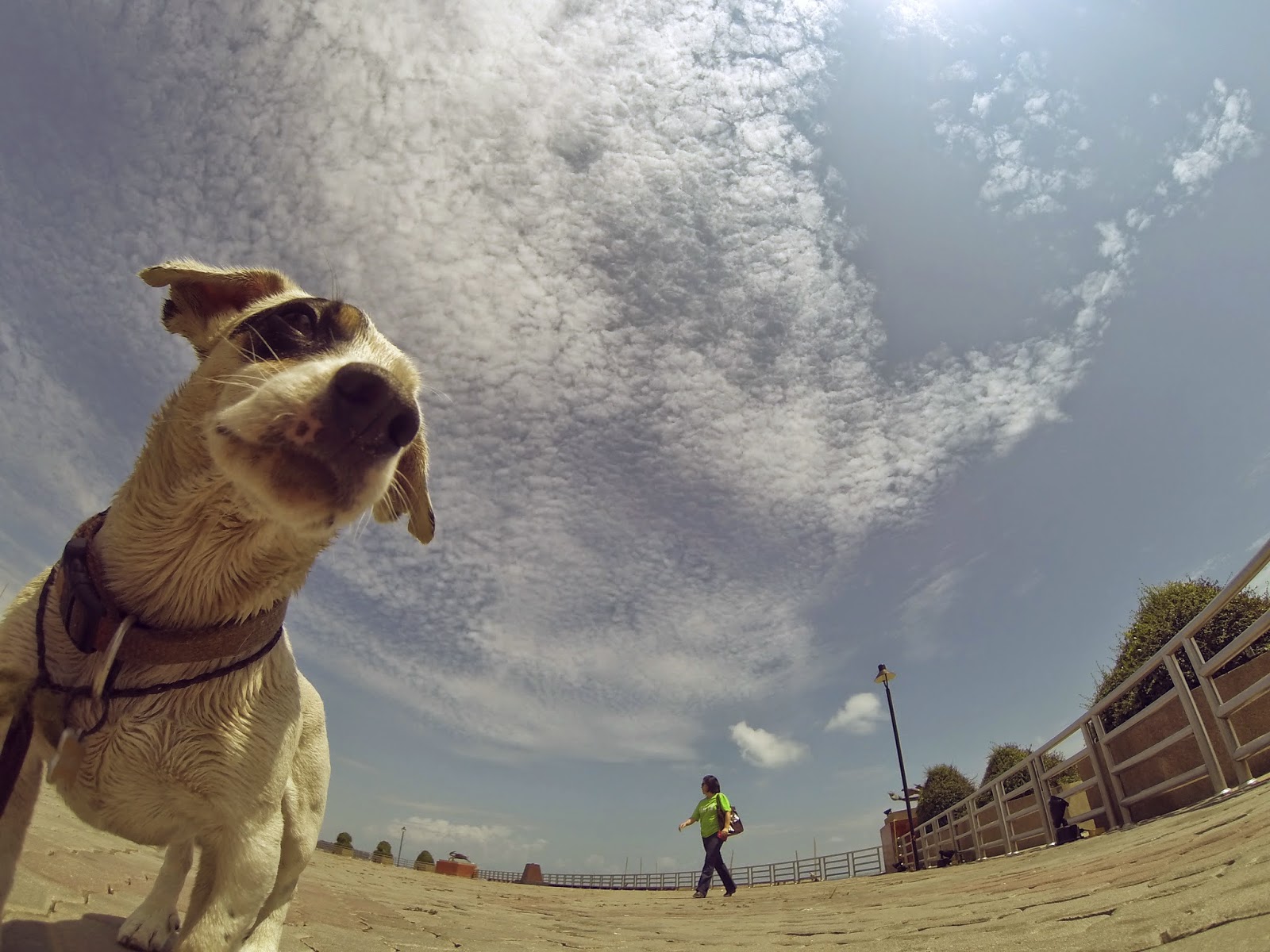 Well, now we are staying with our new friend Olivier and Nood at their place on the beach near Hua Hin. After riding at the heat we took a break for couple of hours to wait for the sun to cool down and continue the road afterwards but then we ended up in this lonely beach with a single beach bar on it. Olivier and Nood are running the place as well as their guesthouse back. We were too lucky again to find such a kind and generous people here. We thought to take a couple of days beach break before going any further. Olivier is a great guy and we are spending most of our times hanging out at the beach and chat with with him. Nood and her mom are feeding us with their delicious food and we are just so happy at the moment. I also have a young new friend called Gaga. But i'll talk about that on the next episode. So, stay tuned and have a great time wherever you guys are. Bye bye for now from sunny Thailand.
Posted by lemmysjourney at 12:44 AM