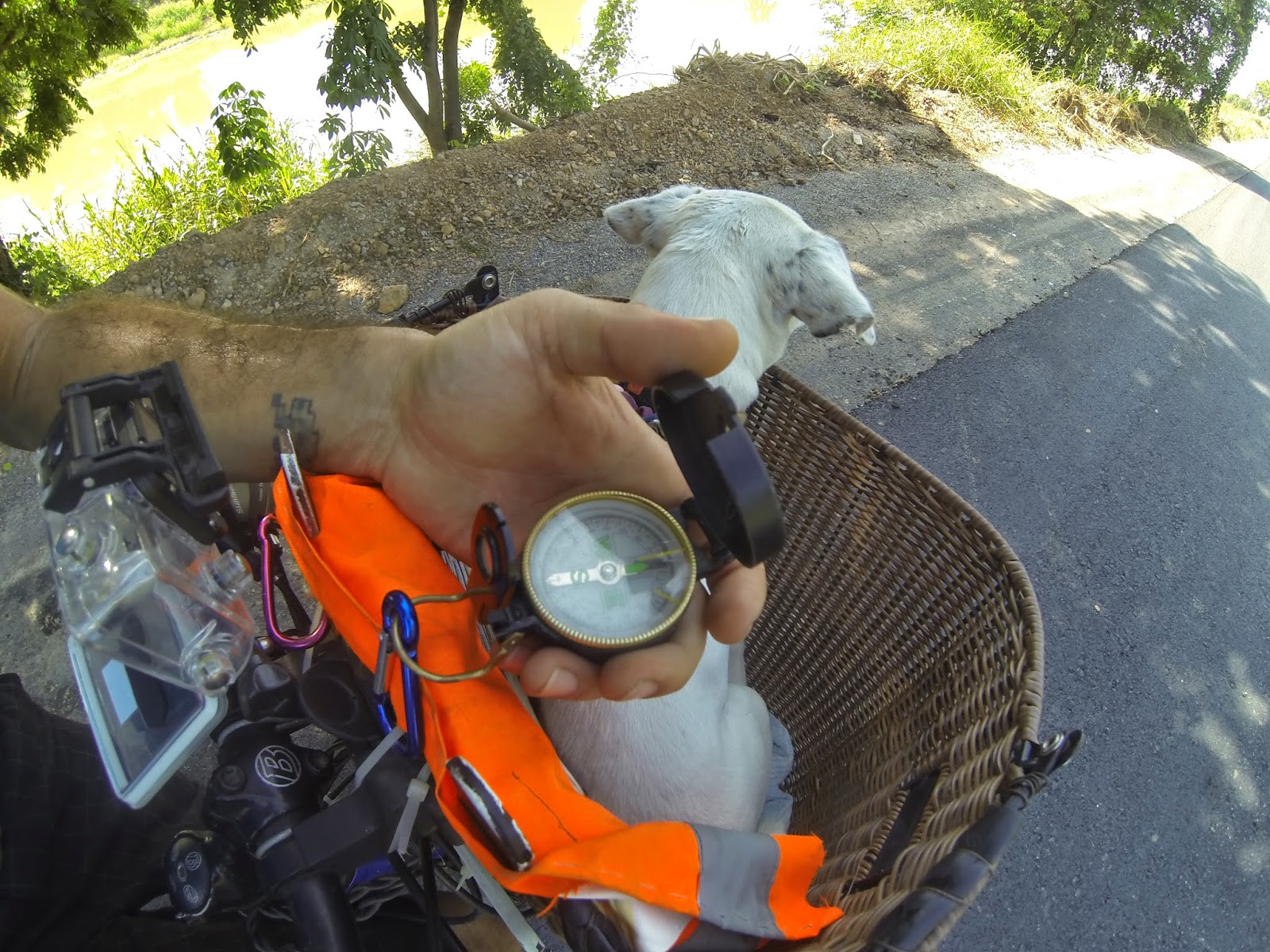 It's been three days that we've left Ayutthaya and we are still on the road. Culu made a little bit of miscalculation i suppose. It seemed to us that the road will be about a day but not. We left the fabled city early like 7.30 am and hit the road but we can only arrive the city called Saraburi around 7 pm and it was just %30 percent of the road we suppose to do. On the map everything looks so easy though.
Culu's plan was trying to find an alternative way to the highway. There actually were some alternative ways. Somehow he manages to took us outside of the town then we ask this young motocab driver waiting at the her station. We hoped big time that we understood her or she knew what she was saying. We were glad that she was right. 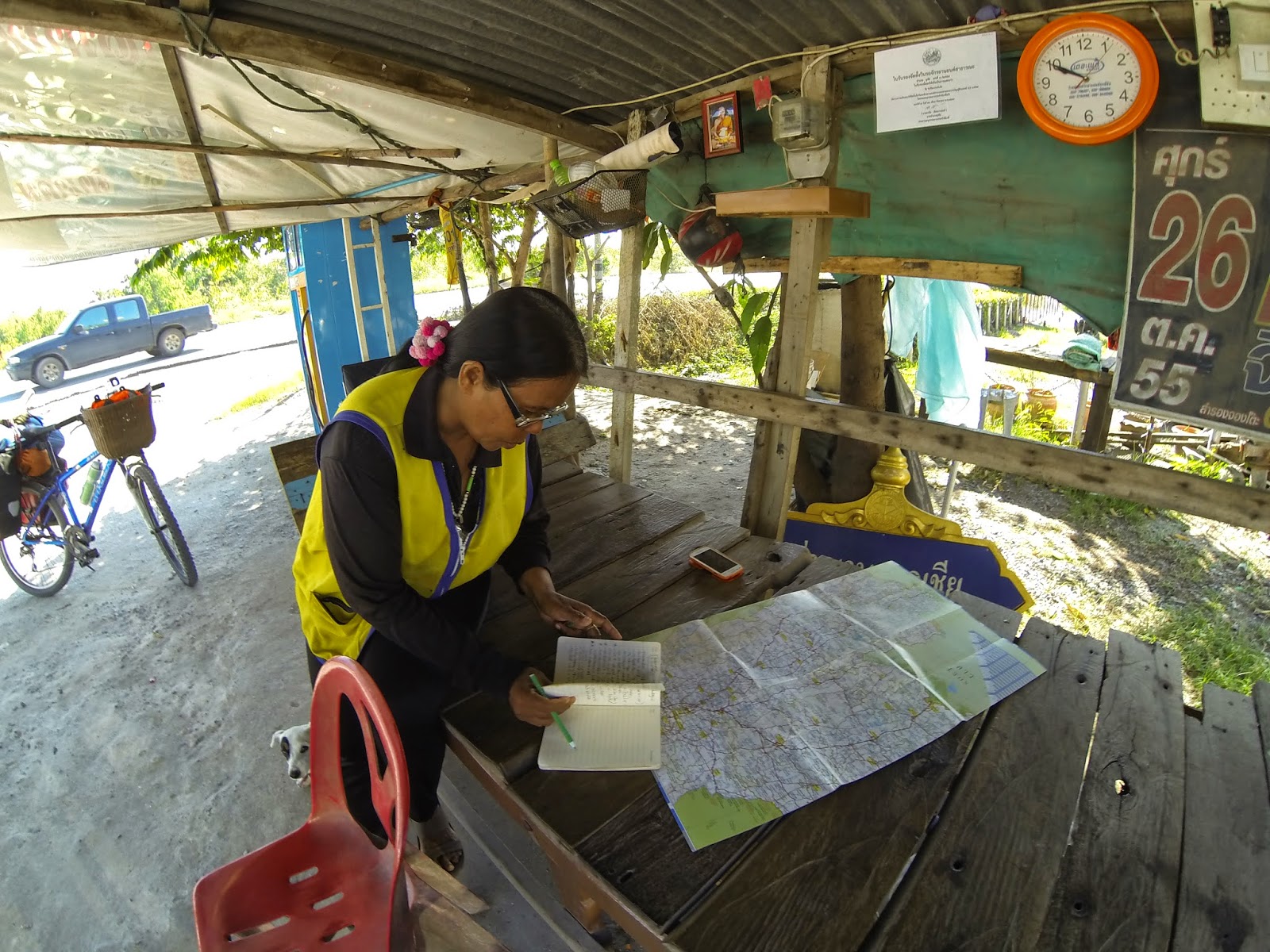 At first we thought we would reach the national park headquarters in the evening and we would spend a day before we start pedaling south but it was way more different than we thought. The first day we did around 67 km to reach somewhere just outside Saraburi. We didn't get in the town. We only pass from it to take the highway through Khao Yai National Park. We end up in a budhist primary school's garden just infront of another national park called Phra Phutta Chai. You can check the first part of the route from the video below. 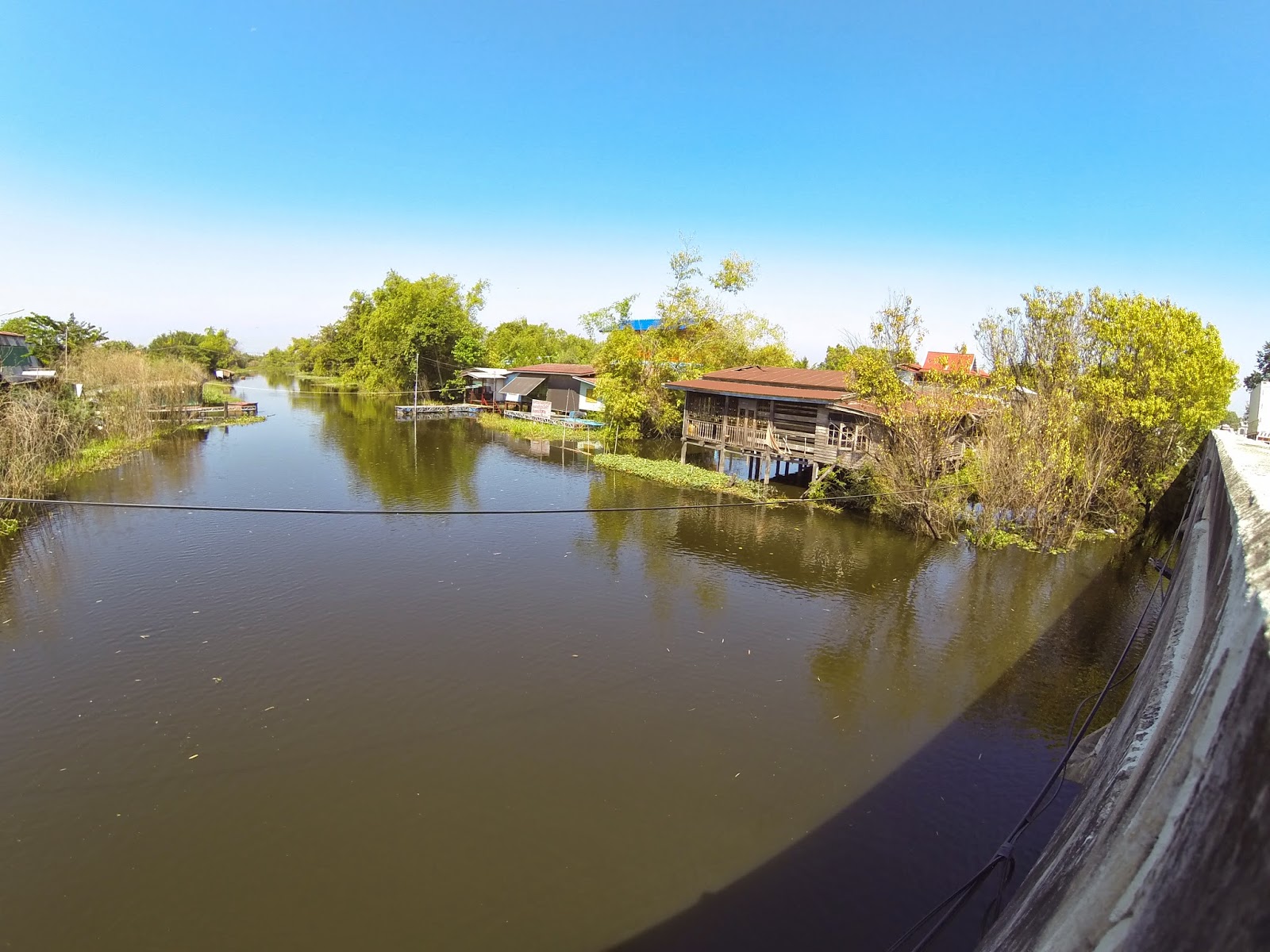 Just outside of Ayutthaya 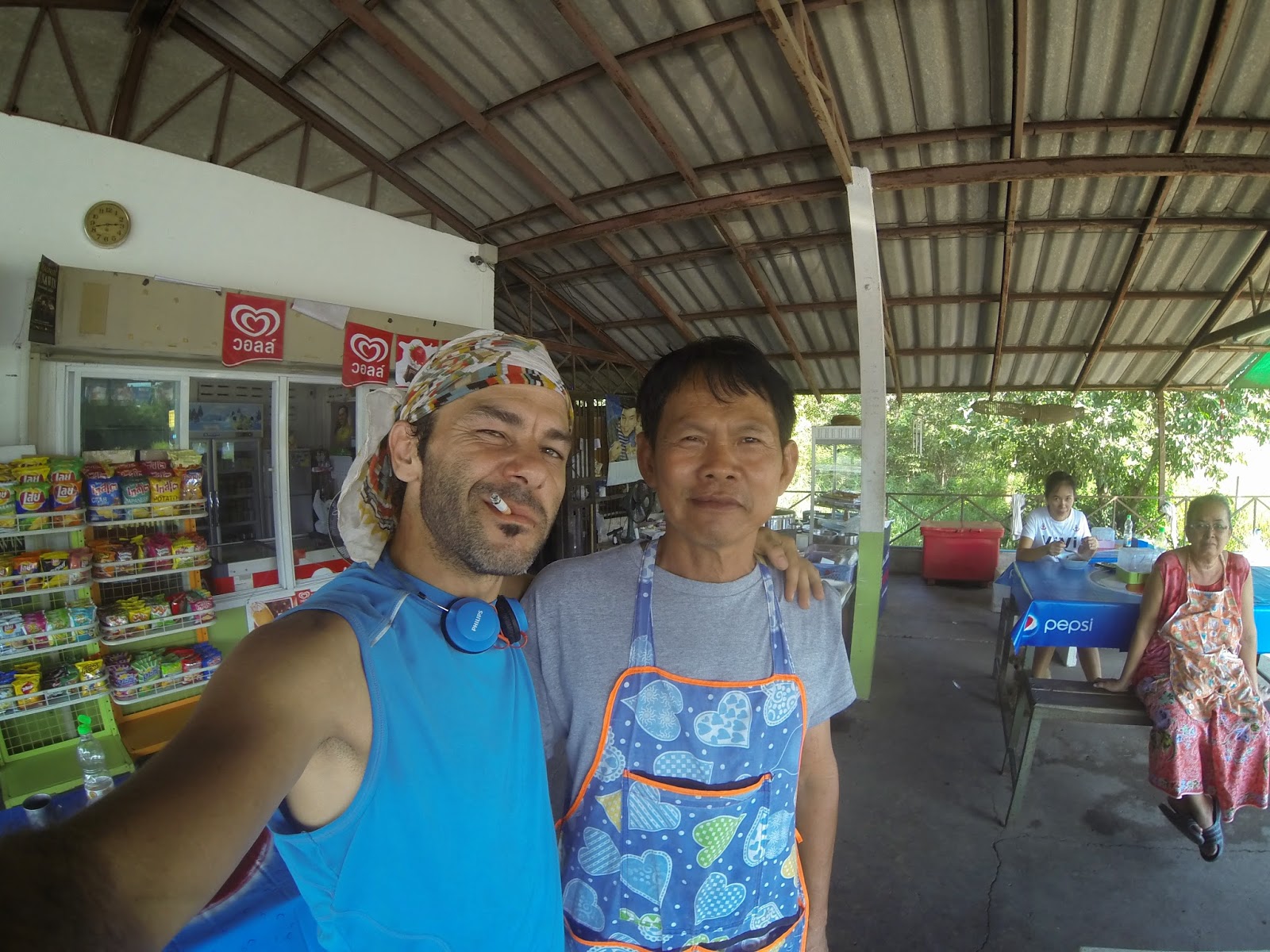 This guy fed us with great noodle soup and fixed my front wheel valve when we stop by them asking the directions and buying a pack of cigarettes. 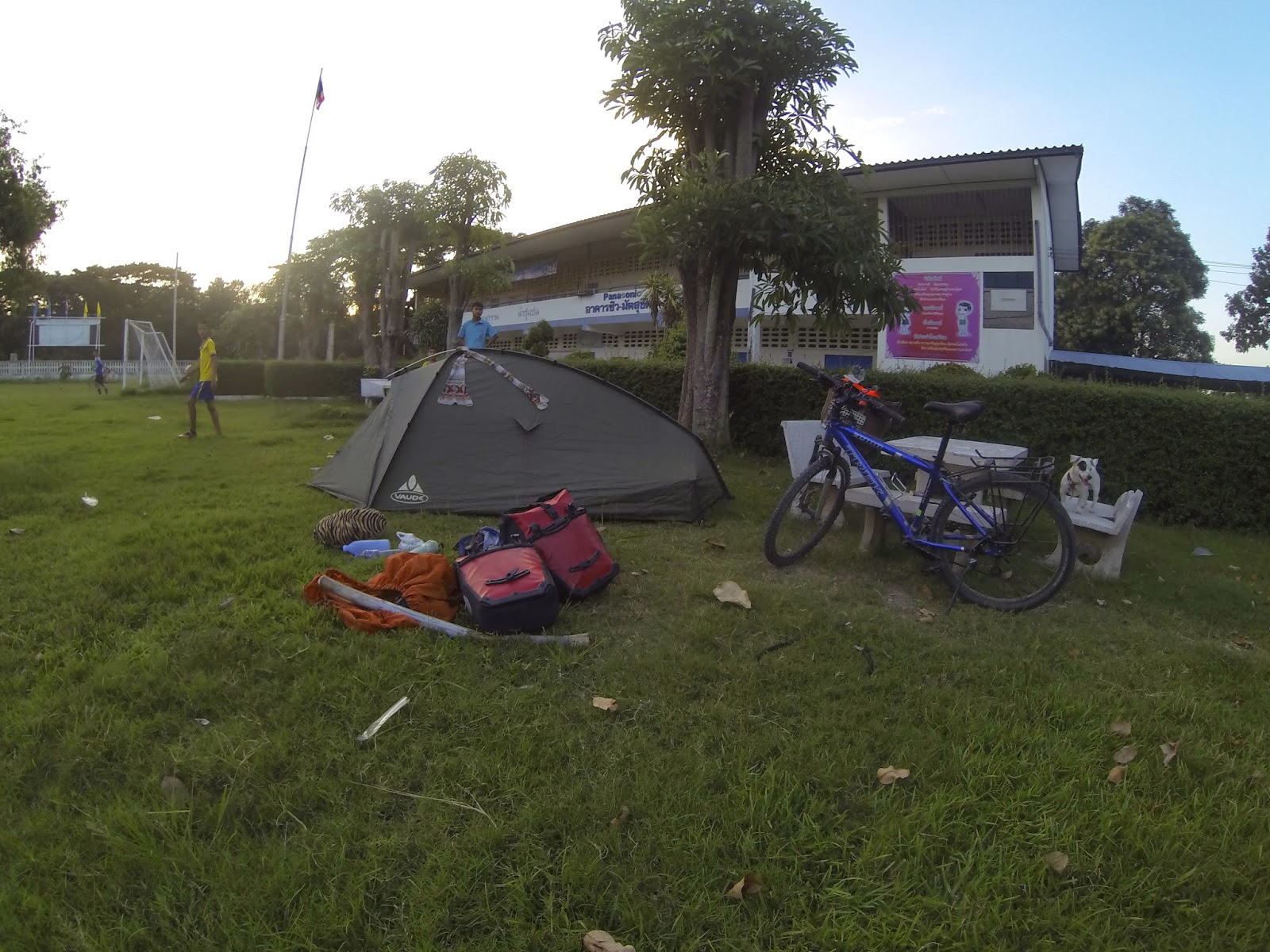 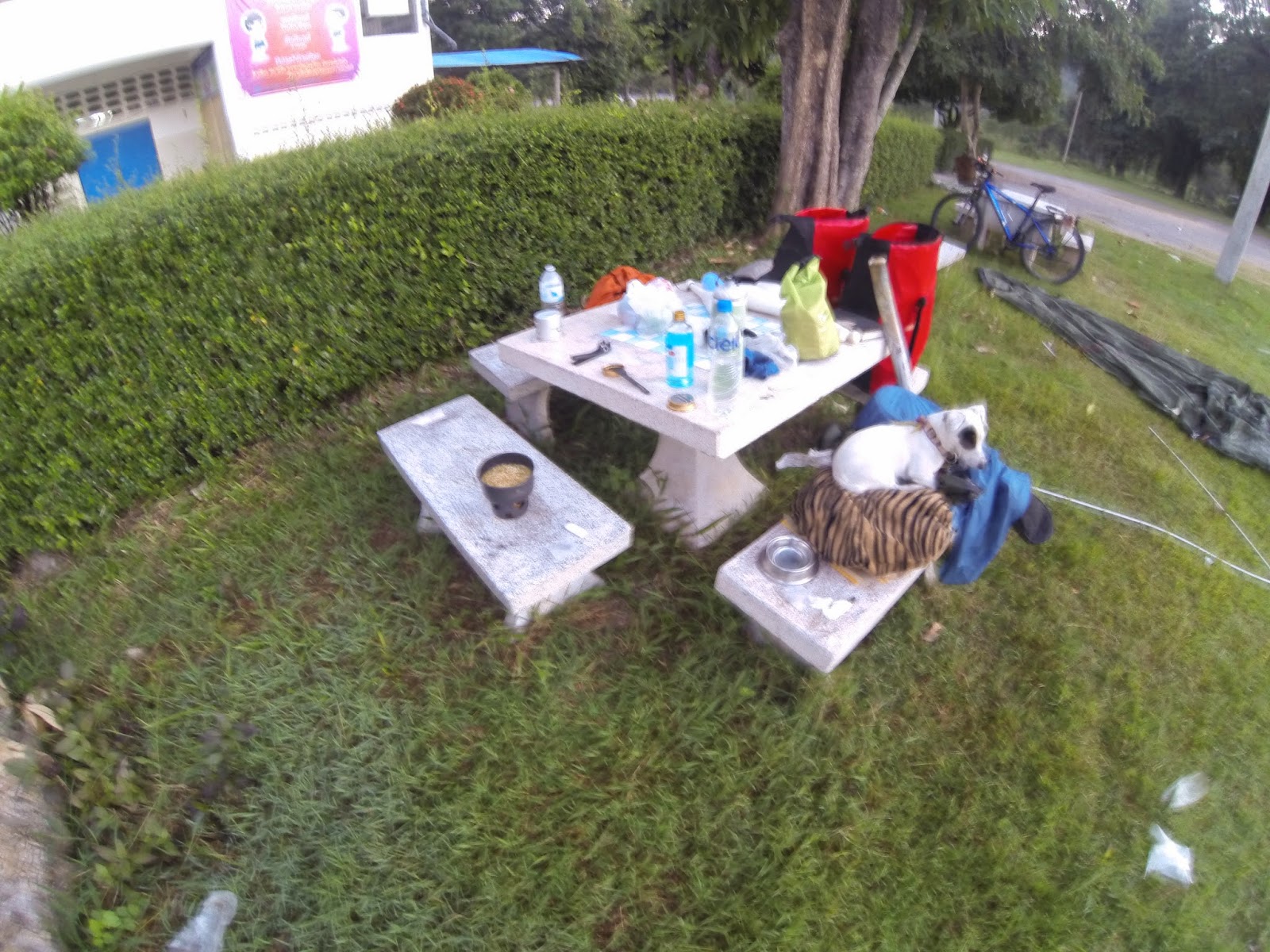 Early in the morning 5.13 am exactly i wake up to pack our stuff back and have a breakfast before hitting the road to Khao Yai

We would like to give you some information by the way about why and how we are doing these road videos. Before we start riding, Culu is picking an album he likes to listen during the day depending on his mood. Because sometimes the road is just flat or we were to tired or we need motivation to do it. The short videos you are watching are actually a summary of eight to ten hours bike rides. He tries to record actual information of the road for cyclists around the world who would take the same road as well. And about the music you are hearing on the back is what he was listening on that specific track. So it might give you a little bit of idea about the day we are spending almost we feel like. And after all we will have a track list of the music we had listened during our trip. We are giving the names of the songs right below the videos from now on. It may be boring for you sometimes but don't underestimate what we are trying to do. Even i am getting tired of the road while sitting in my basket in front of the bike but i can't imagine how Culu's nerves can resist that much of effort he is spending during those rides. It isn't so easy to complete such a way of traveling guys. But we are definitely having fun by doing it. So here's the first part of the Khao Yai Trilogy.

The second day we thought we would be at the gate right away we start riding cuz as you have seen in the video Culu was saying we are close to the National Park but not at all. We pedal and we pedal and we pedal but we were way too far from it like we learned later on. We stop by some places to have some snacks and water. Usually Culu is not drinking too much water like me but on this trip he was drinking about six to eight liters per day. It is very hot in Thailand now. It's just the end of the rainy season and very dry and humid so if you are not having what your body needs you will probably end up having diarrhea which is not what we wanted at all. 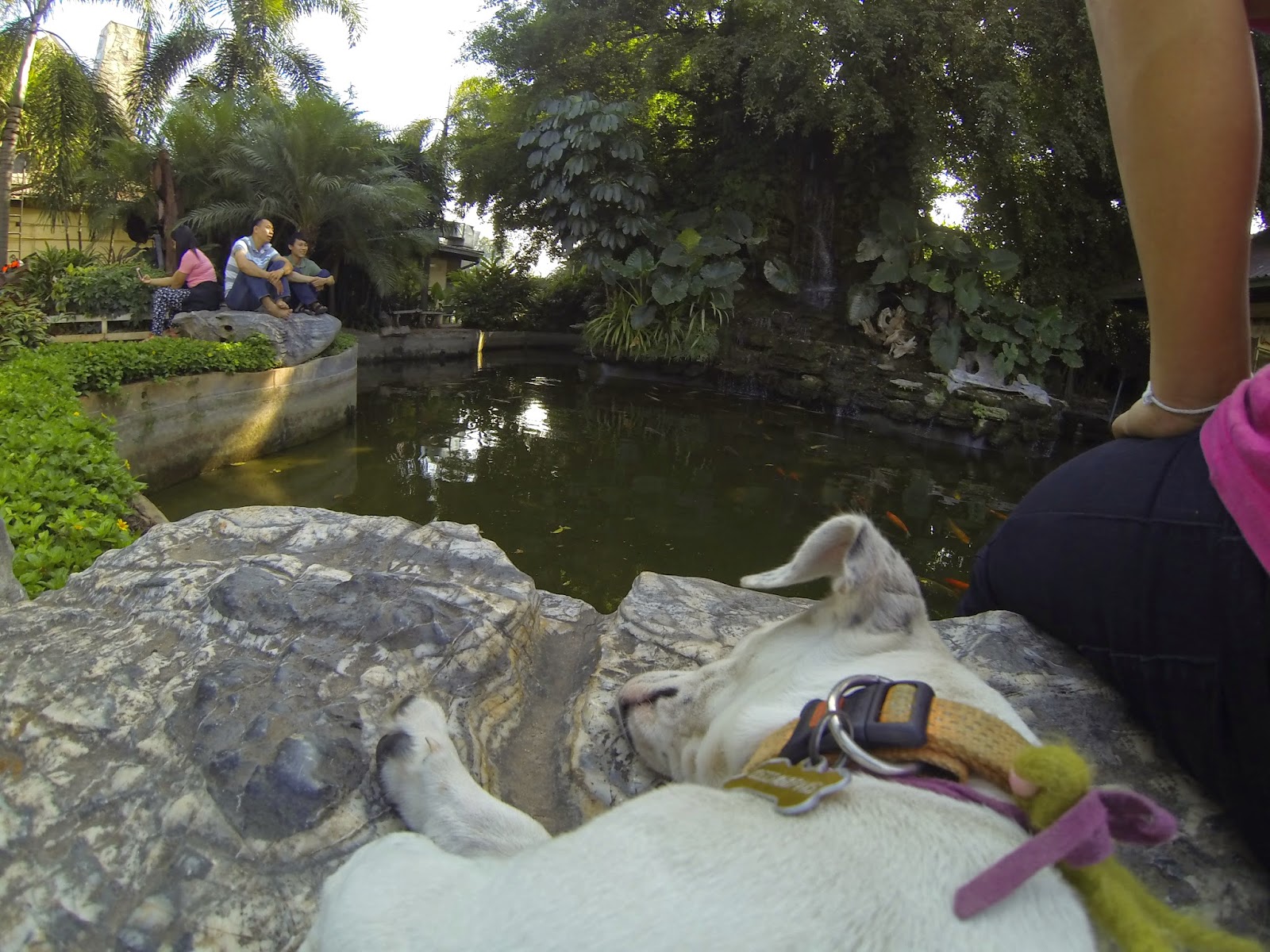 Stoping by the Farm Chokchai's food stalls to have some more food. Once our dear friend Mark Booker told Culu that a cyclist is always hungry. Which is %100 true that we are now experiencing it. 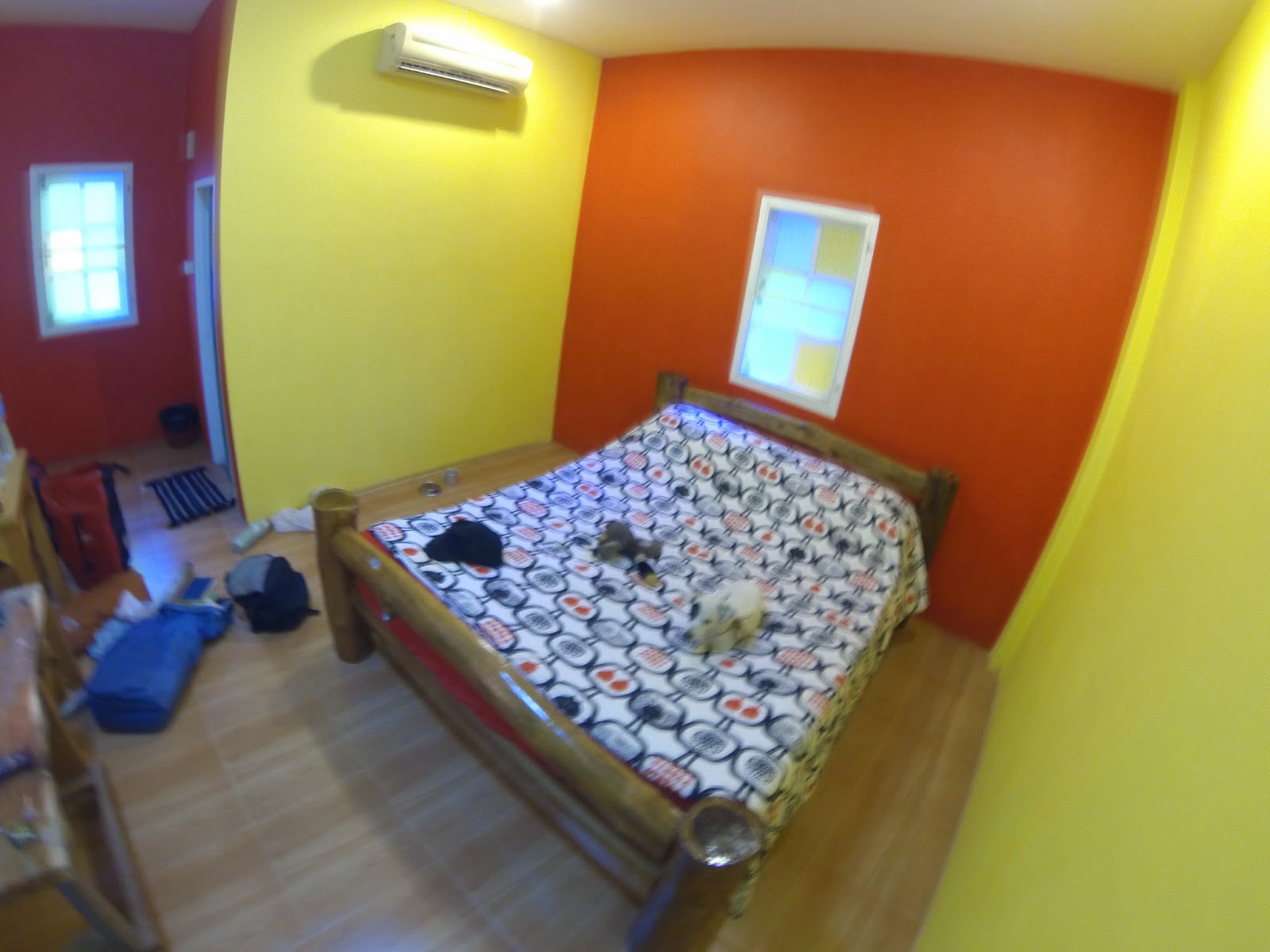 We end up in this cute little motel in Khao Yai district. Still not in the National Park but at least we have a place to stay after having two days of hardcore riding. We had to take this option to clean up and reorganize for what we are facing with. 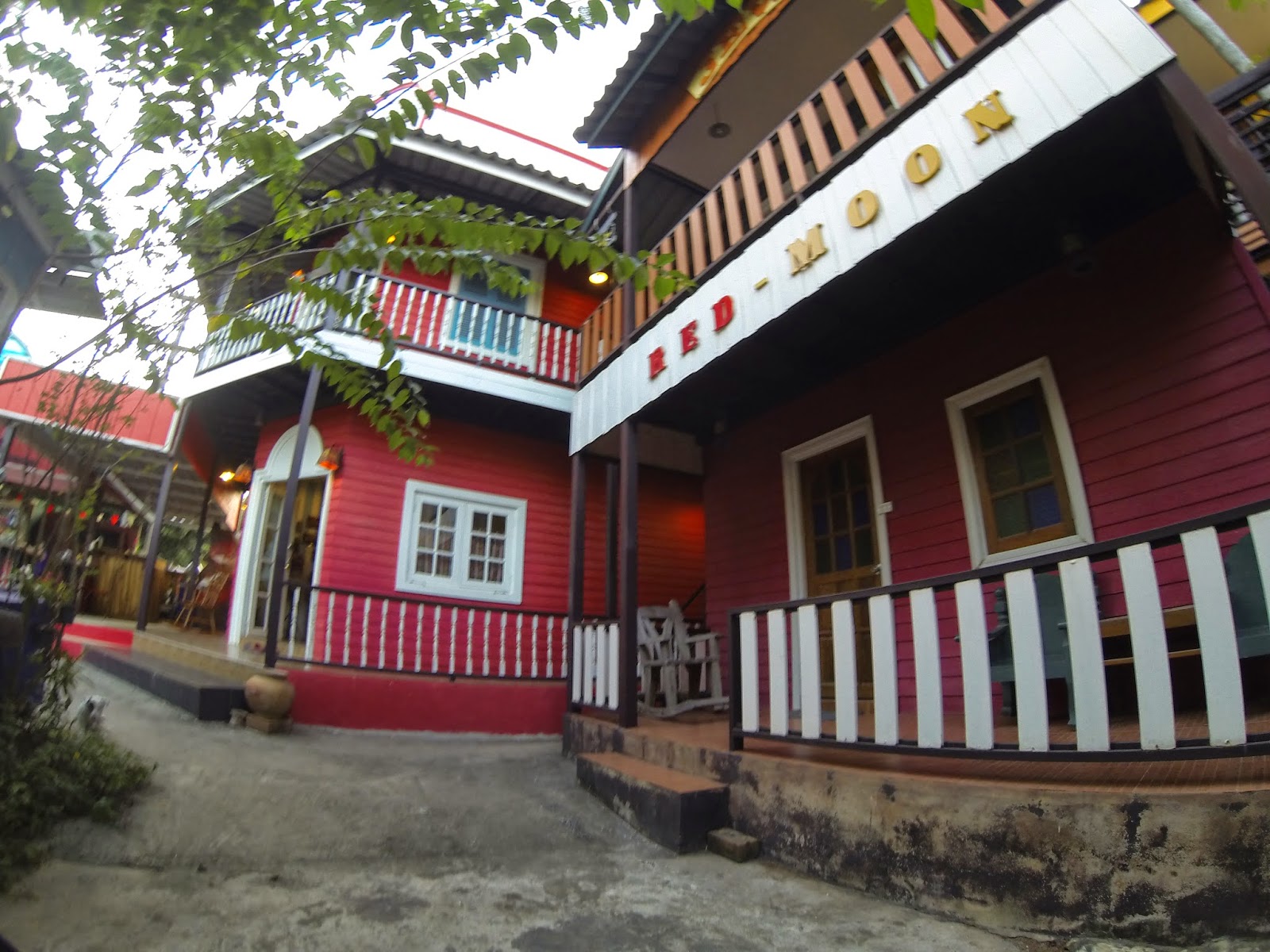 Our budget is about 500 bahts per day on this trip which is around 15 dollars a day. Funny but doable. Anyway this place was 900 bahts but we have to crash in without hesitation at all. Khao Yai district is a high end place though. We didn't know that we will find some golf resorts, spas and luxury residencies when we are coming. We thought it is just a national park with a beautiful nature and wildlife. But sometimes you need to treat yourself on this kind of travel. 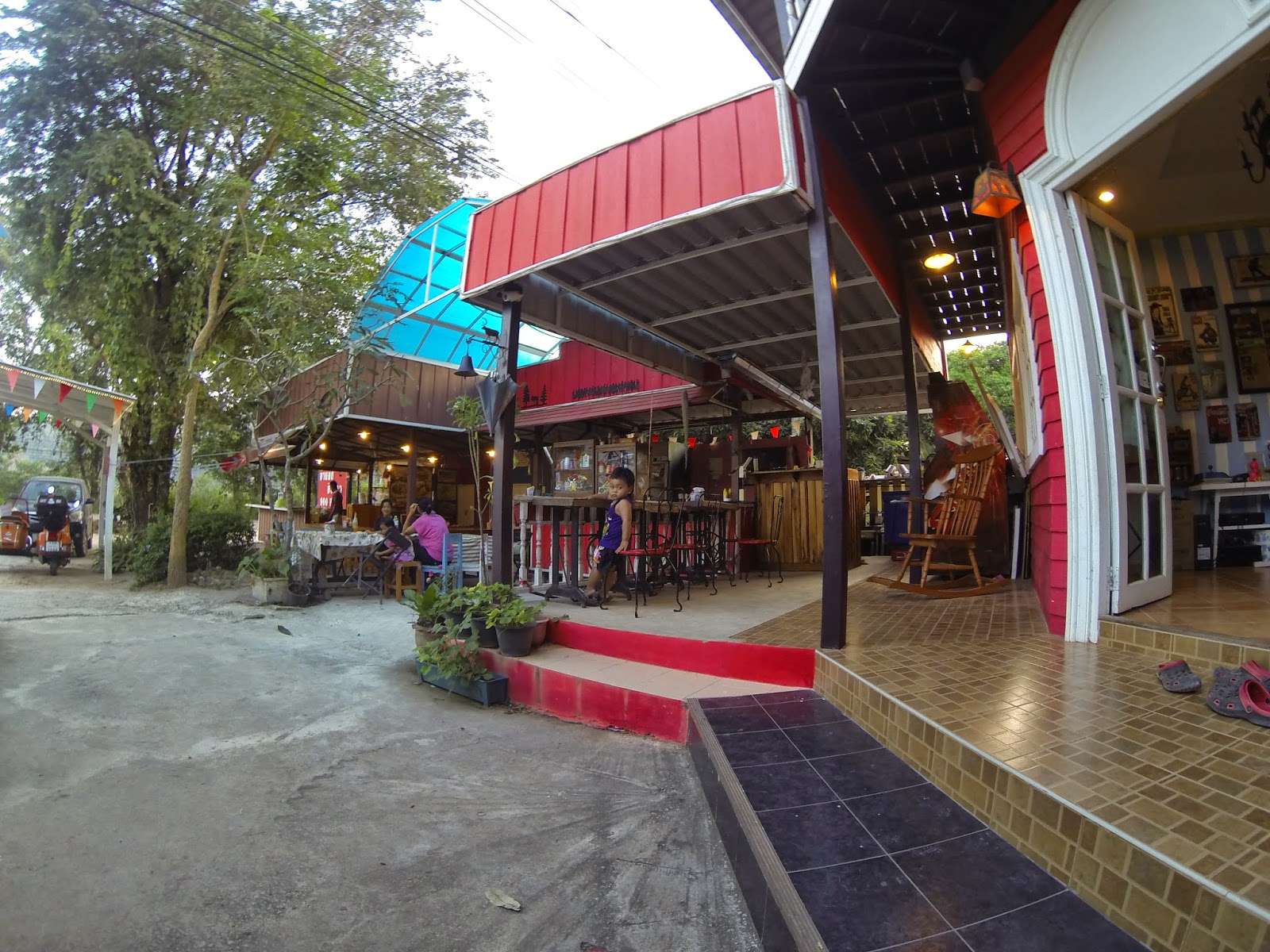 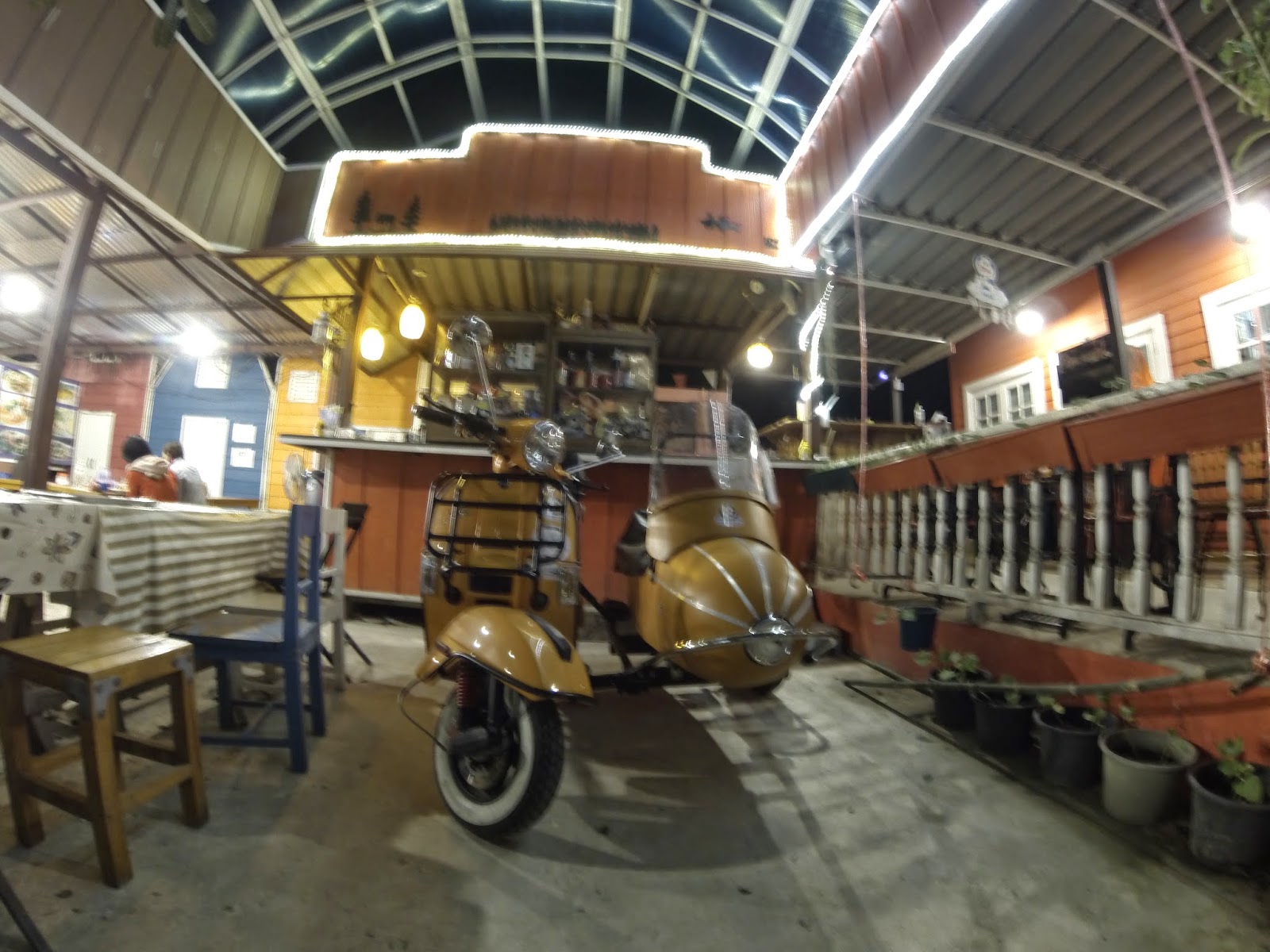 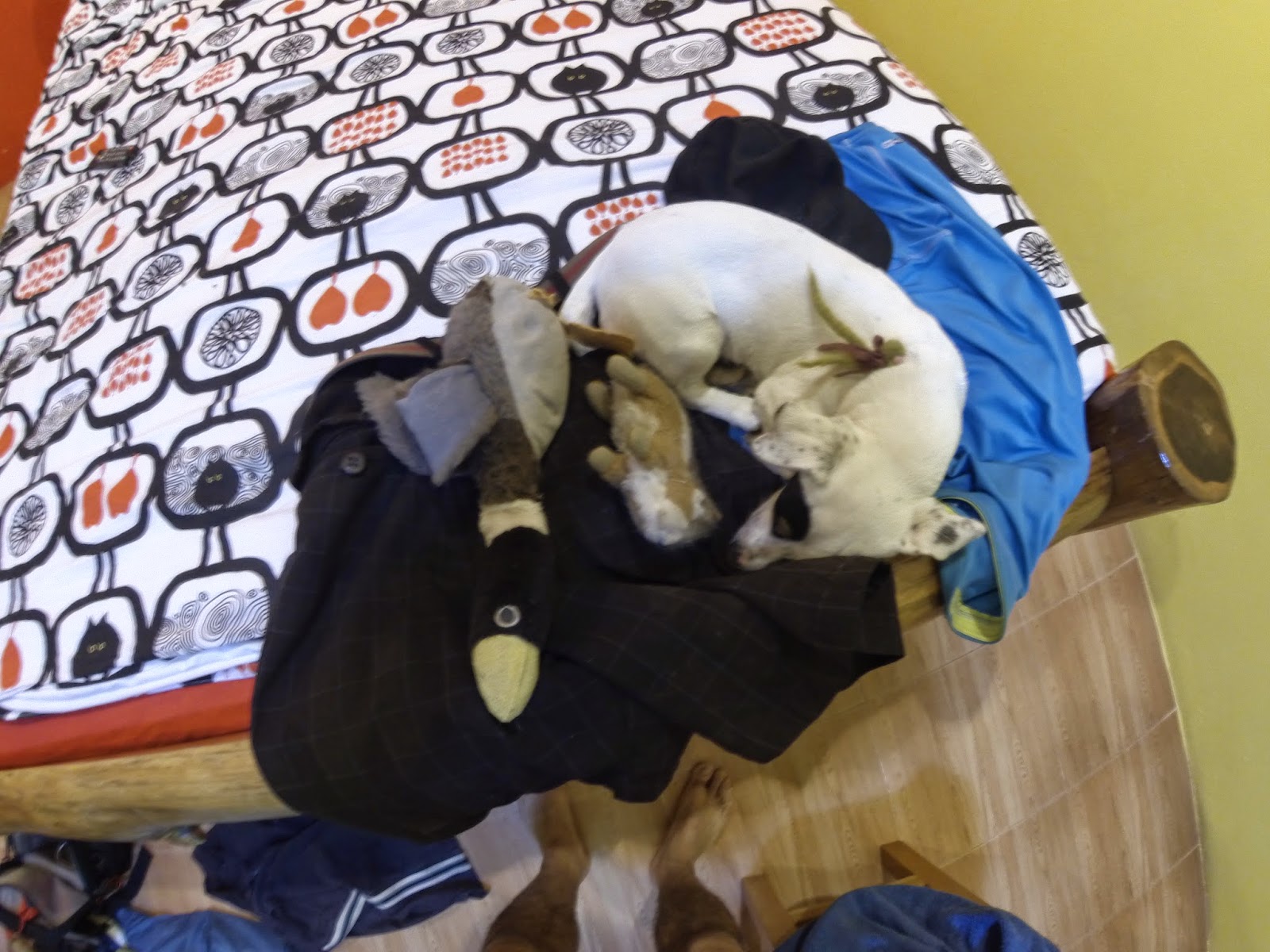 Me having a nap right away we get in the room with my favorite toys Culu brought from home.

The second day Culu and i made about 85 km from Saraburi to reach Khao Yai where we stayed. He told me he never felt so fit since high school. I didn't get the meaning of being fit but anyway it has do with being healthy i suppose. He lost weight about 5 kg and his pants are dropping down from his hips now. He is eating really good food but loosing weight anyway like i do. That's the way if you are on a bike touring trip. I can't still believe his energy though. If you are wondering what we have done the second day just watch the video below.

And here we are at our third and hopefully the last day in here. We were not planing to stay so much around here but somehow we will keep up the pace by taking a train to Chonburi tomorrow. But first we need to be at Prachinburi train station to take our first train trip in Thailand.
After rejecting from the National Park Officer because i am a dog Culu had to take the road to Wang Nam Khiao. Which was about 82 km away from where we were. We made all the way for having nothing at the end. But at least we have seen the area and some forest. The route was all uphills and downhills. Not an easy ride but very pleasant. Being in the forest is much more enjoyable than having a ride on the highway. 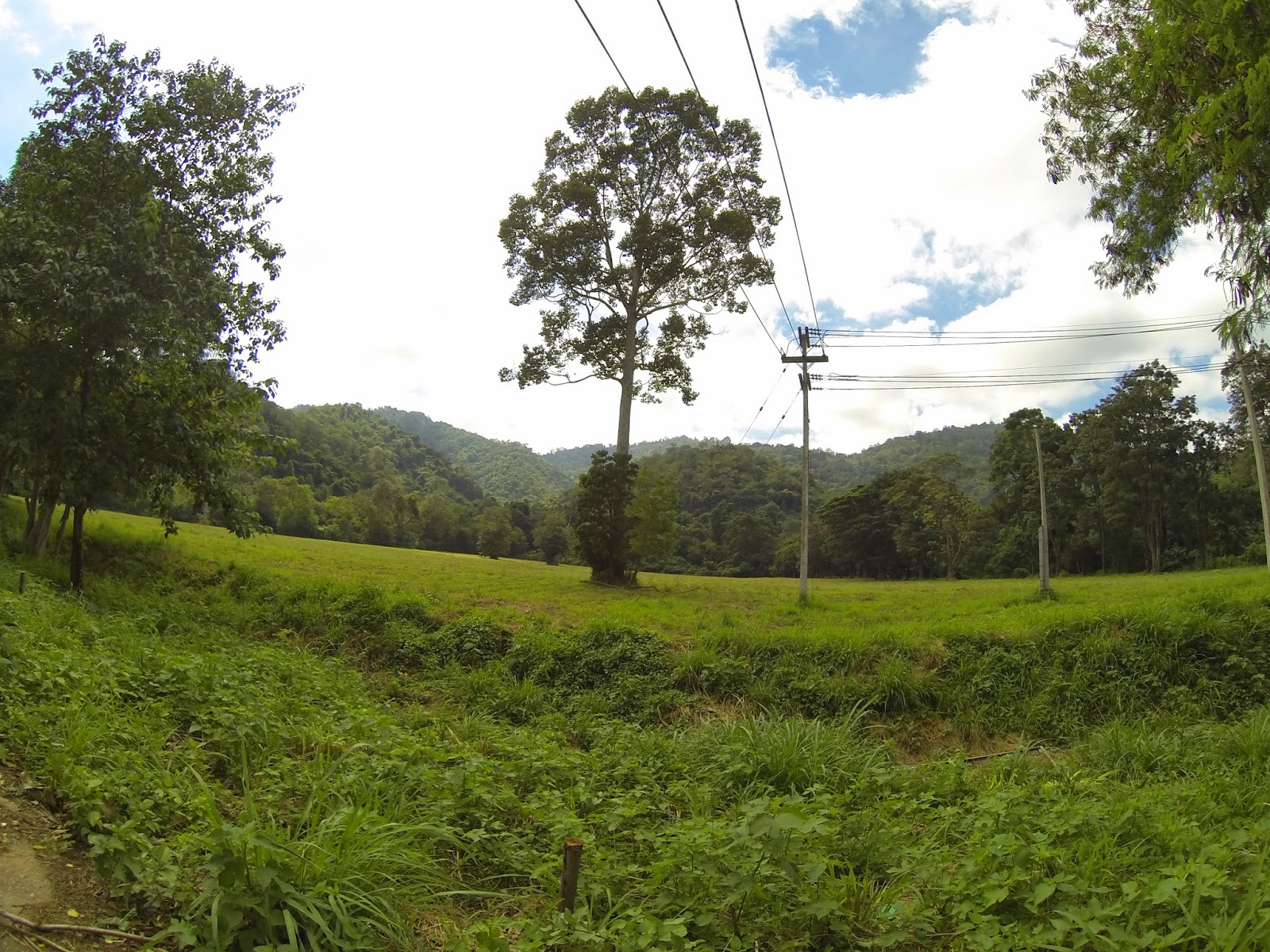 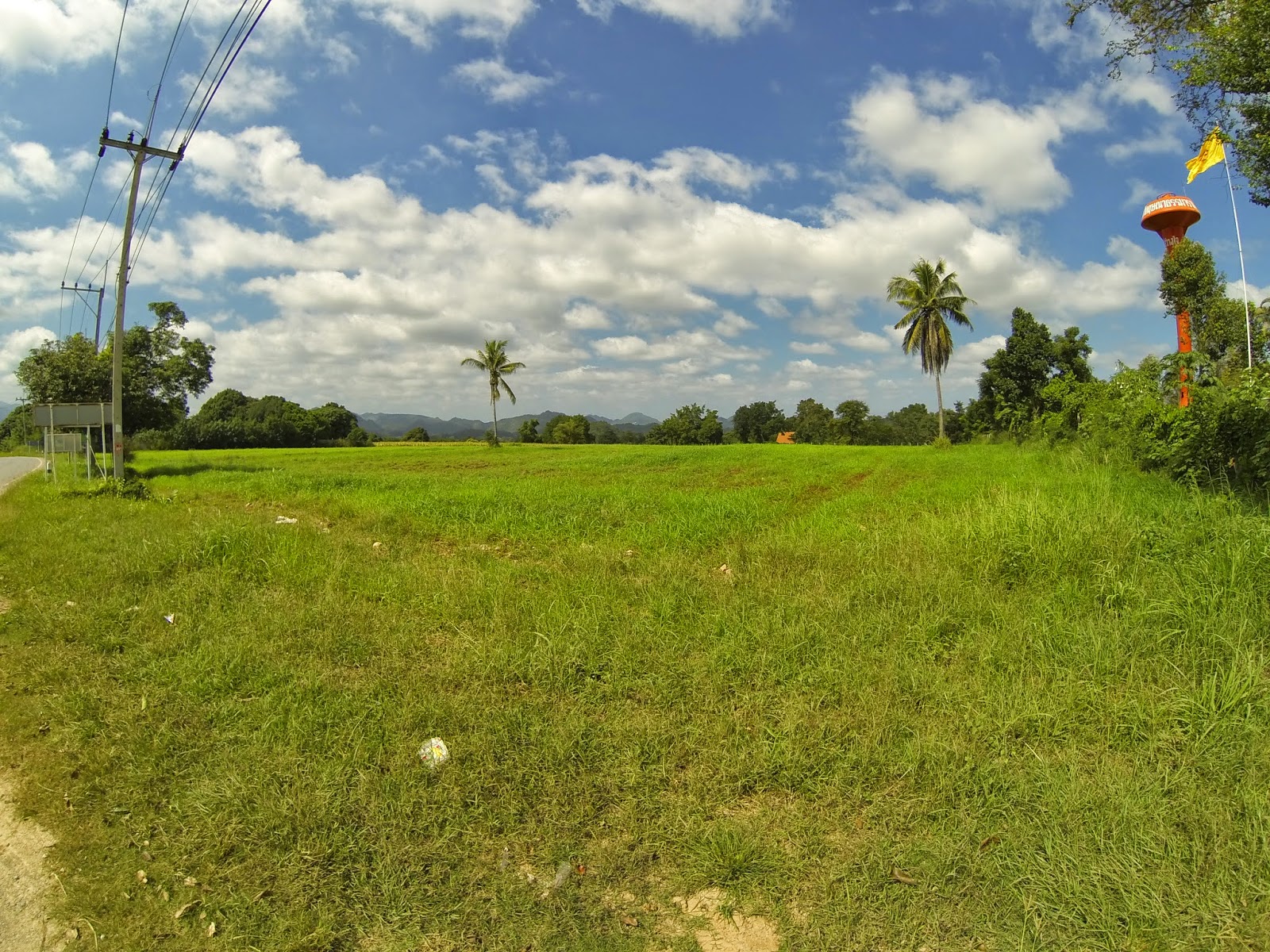 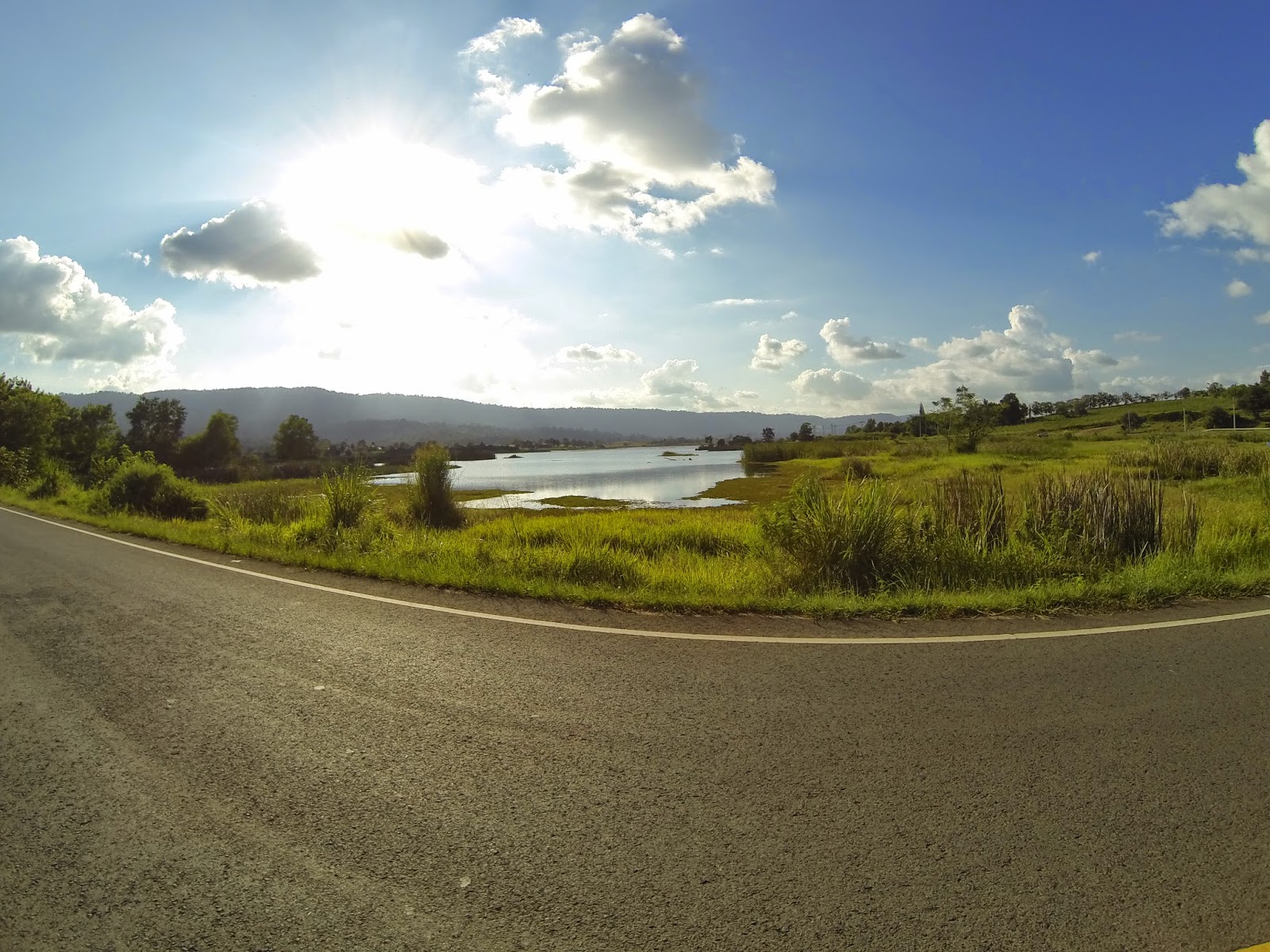 We tried to reach Prachinburi in the evening but all we can do is only to be in Wang Nam Khiao. At first we thought to camp on the way but we were quite late to write the blog and didn't want to delay the posts anymore. So we found this quite friendly and cheap place right next to the raod and stayed there. 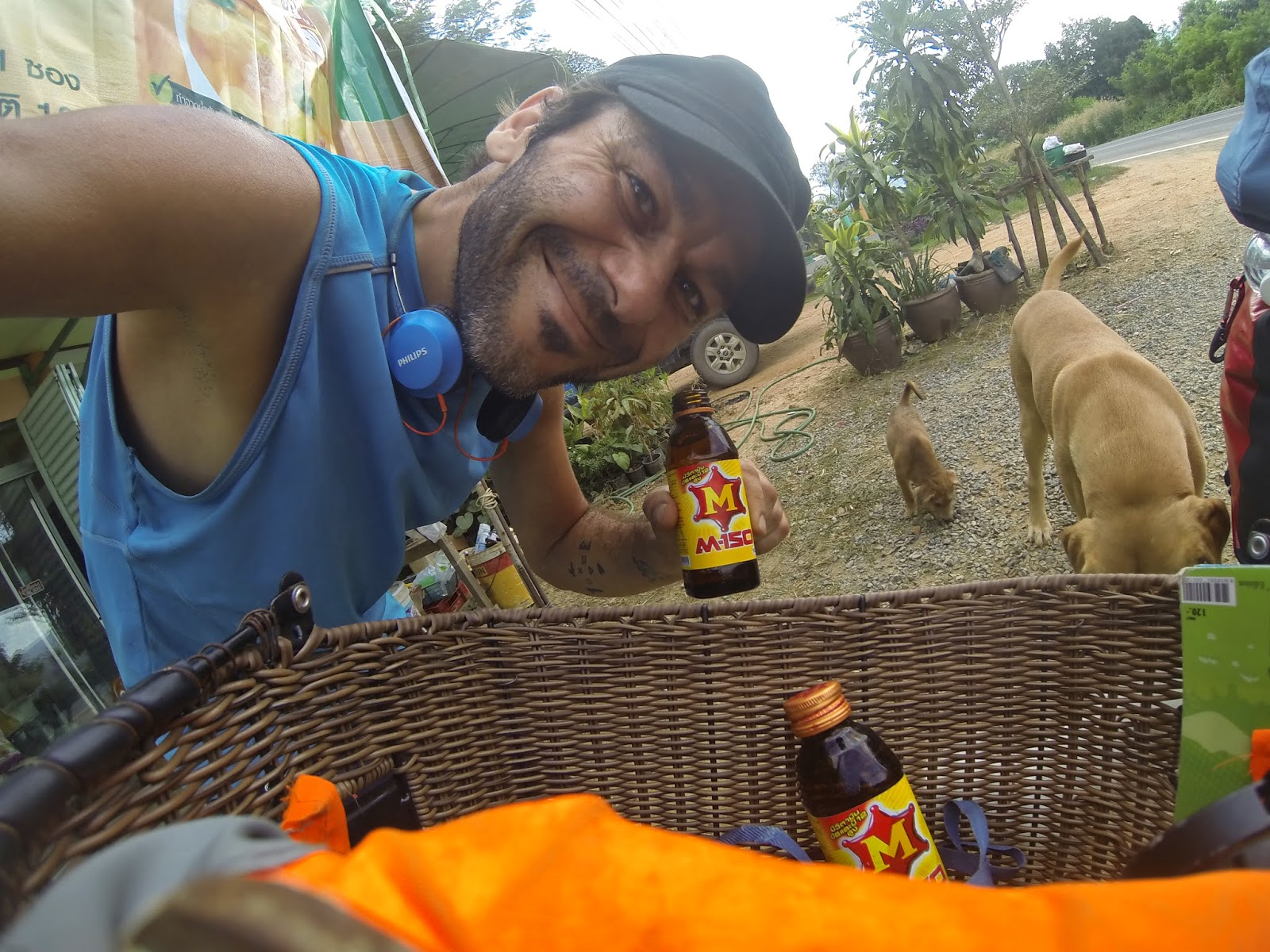 this little bottles of energy drinks called m-150 are possibly the key of succeeding our goals on the trilogy so far. Culu is drinking twice at once while we were biking in Khao Yai

Right before we came here we drop by a farmyard to have some fruits where we met J B. A very cool guy who is helping his father to sell what they are producing in their land. We bought a bag of monkey apple from him. He was selling a bag for 70 bahts but he sold us to 50 instead and then gave a free one too for the road. We had a good chat with him and exchange information. He is studying chinese language in Bangkok but in his holidays he comes to help his family here in Wang Nam Khaio. Delicious apples by the way. 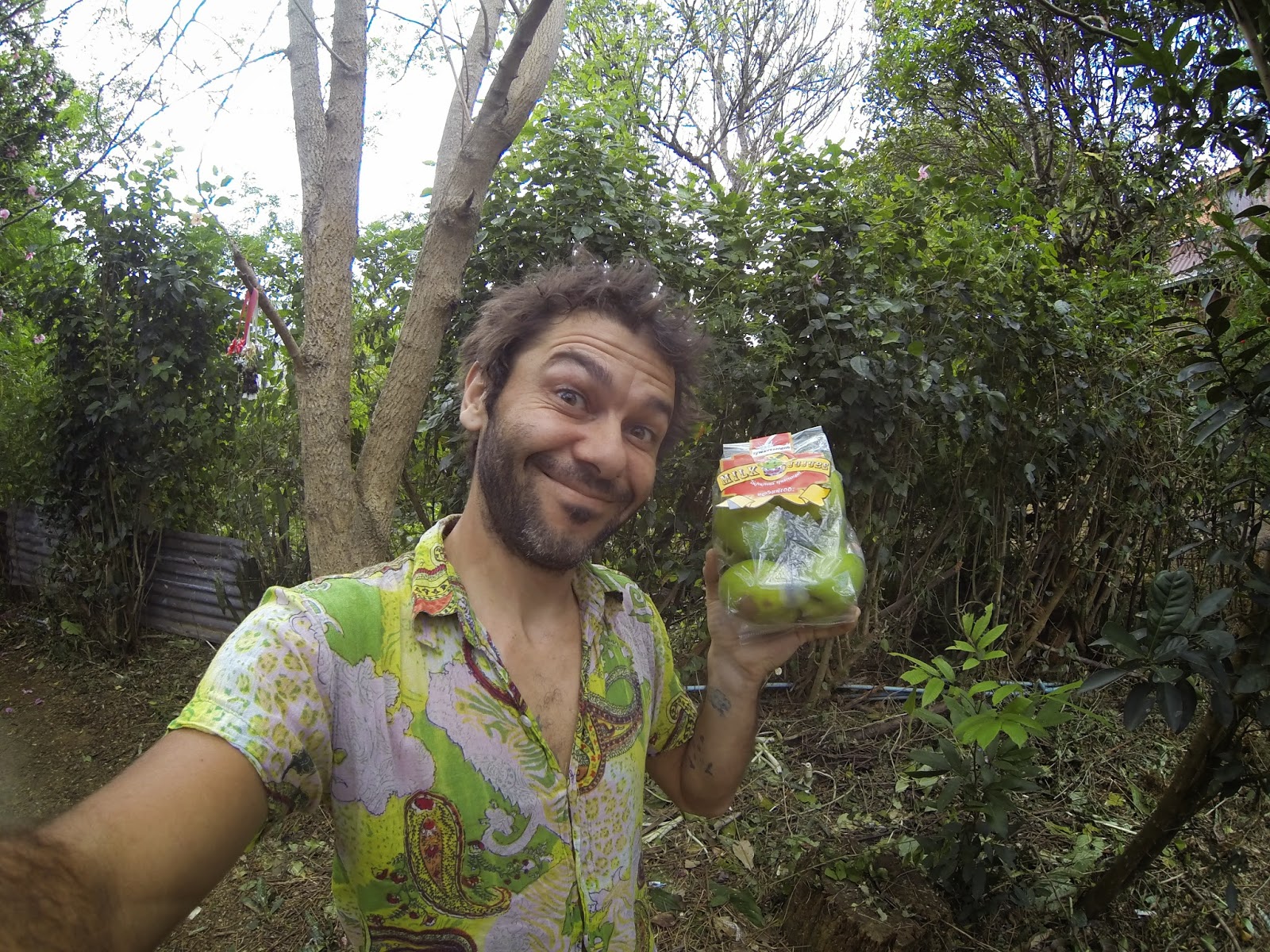 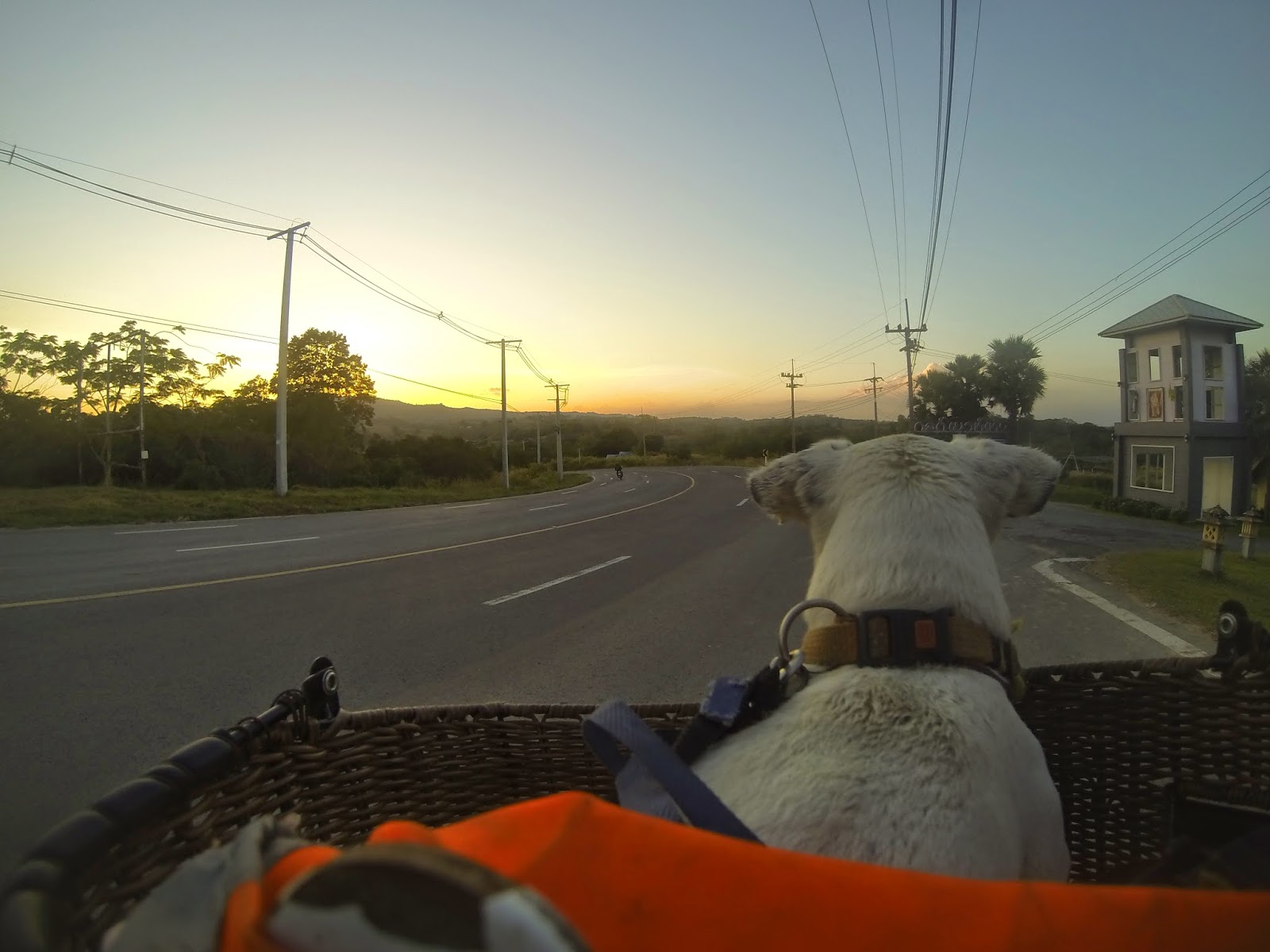 So guys it's been a long post today and hopefully we have satisfied your curiosity about what we are into at these days. Here's the third day of Khao Yai Trilogy below. We are heading south to Koh Chang island but first we will drop by Chonburi on the road and i hope Culu's not making any miscalculations on the map this time. See you soon.

Music from: Ajja - Tulpa - Bebopper
Posted by lemmysjourney at 1:43 AM